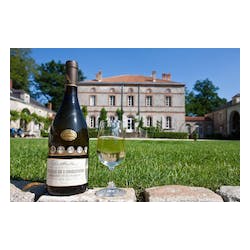 The Oiselinière Gorges, on the banks of the Sèvre Nantaise, is an old hunting house of the lords of Clisson. It already existed in the Middle Ages according to the first known acts dating from 1335. Olivier V de Clisson, of which it is the favorite residence, raises its hunting birds there, probably at the origin of the name of the property. We also discover that these vines are already cultivated there. During 643 years, this field will change only 4 times of hands. The descendants of Madame Douault, who bought in 1767, gave it to us in 2006. Around 1800, the property becomes a country residence of Bertrand-Geslin couple (Marie-Adelaïde is the daughter of Mrs. Douault). Jean-Baptiste Bertrand is then mayor of Nantes. It is therefore in the nineteenth century that the ownership of the Oiselinière takes its current appearance. During the last war, the Oiselinière was inhabited by General Audibert and his wife. The General, head of the secret army of the west was fugitive and wanted by the Gestapo who arrested his wife and daughter. They were deported to Ravensbruck where Madame Audibert died. The General was arrested on March 17, 1944, at the Augustine Monastery of Malestroit where he was hiding. He was tortured and then detained in Buchenwald. He was released by the Americans. Italy in ClissonThe Bertrand-Geslin, Lemot's friends (see Clisson's story), reorganize the entire estate in several stages. From 1800, around a trapezoidal courtyard are built outbuildings and a monumental porch, tufa and covered with slates. This ensemble is built in the neoclassical style of the time. The exterior fittings precede the construction of the house. In 1807, Bertrand-Geslin planted the park of rare species, native trees and boxwood. In the middle of the park, it opens a perspective on the Castle of Clisson, this perspective still exists today. To the west and east are two buildings on one level. The western one, dating from 1820, has on its facade a row of six oculus (circular niches surrounded by briquettes) and housing the busts of famous men: Olivier de Clisson, Conde, Duquesne, Jean Bart, Bayard and Duguesclin. This is the famous Galerie des Illustres. This iconography of stone evokes in many ways, the statues of the Nantes Stock Exchange of the sculptor Debay father. Also, without precise writings one attributes, however, to the latter, the creation of the busts of the Illustrious. The main house, an Italian villa dating from 1830/35 is built in a style called "Clissonnaise" (see history of Clisson and Vendée Wars). Exceptional of this style, it is the main house and not the outbuildings that borrows the major features of Italian-style rustic architecture: Genoese cornice fittings, chimney stumps, berry frames with large bands, oculus ... .The architects remained unknown, but it is legitimate to assume that Bertrand-Geslin, by his position as mayor of Nantes was in contact with the most famous architects of the time, like Mathurin Crucy. Since always: vines!For nearly seven centuries the vines are grown in the Oiselinière Since 1335, we talk about vineyards. Of course, at the time, they are not used to make wine but alcohol. It was called "heating" wines. The first vines of Muscadet appear in the south of Nantes in 1635 and it is to the Oiselinière that they are planted there. A parchment, deposited in the Departmental Archives attests. It reads: Jean Goulet of the Pit of Nantes, baille several individuals of the parish of Gorges, a piece of 78 bushes called "Grands Gâts", dependent on the land of the Oiselinière, to plant it in vines white Muscadet ". These parcels are always the same. The property remained in one piece. All the vines are grouped around the Castle. They are exposed southwest and dominate the right bank of the Sèvre Nantaise. This plateau consists of a mother rock called "gabbro". The gabbro is a rock that in contrast to basalt has undergone a slow cooling allowing crystallization where the presence of crystals. Its grainy structure is green / black and very dense, called plutonic. This exceptional soil, the sunny exposure and the constant ventilation of the vines give rise to particularly aromatic and fine wines.

"This wine is fresh and slightly sparking, with floral and fruity aromas when young (apricot, hawthorn). After one or two years of maturation, pungent and

Wine & Spirits 93 'Year's Best Loire' "The 11-acre Grands Gats is the site of an ancient vineyard, the vines replanted 50 years ago in soils rich