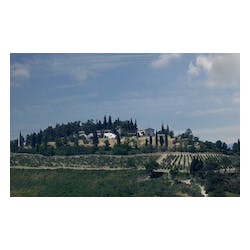 Owned by the renowned oenologist Vittorio Fiore, Castelluccio was originally founded in the 1970s. In the 1980s Vittorio Fiore became the consulting winemaker and in 1999 he purchased the majority of shares in the property. Castelluccio is nestled in the Modigliana Hills, between the two towns of Faenza and Forlì, at an altitude range of 750 - 1500 feet above sea level. The territory is known as Emilia Romagna and was part of Tuscany until the 1930s. Castelluccio extends approximately 150 acres, with 36 acres of vineyards and 6 acres with olive trees. The soil is compact layered marl and limestone, the location is composed of micro-areas called "ronchi", referring to the rock formations that protrude from the mountain side, and render a very high quality of grapes. Sangiovese di Romagna, Cabernet Sauvignon and Sauvignon Blanc are the main grape varieties grown at Castelluccio. Sangiovese di Romagna is indigenous and expresses perfectly the character of the terroir and is a central grape to some of the world's greatest wines.

This wine represents one of the best expressions of the Sangiovese di Romagna's main characteristics: fruitiness, freshness, and pure drinking pleasure blended with an unusual

This wine represents one of the best expressions of the Sangiovese di Romagna's main characteristics: fruitiness, freshness, and pure drinking pleasure blended with an unusual

Fresh, bright, and juicy with cherry and berry fruit plus accents of leather and floral notes. Chewy on the big finish, it's a great companion

"Le More" refers to the blackberry character of this deep and lively Sangiovese di Romagna. The grapes are harvested from the end of September to