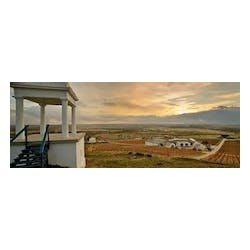 Tokaj is thought to be the first vineyard region in the world to have adopted a classification system. The Disznókő estate was classified as a first growth property at the time of the initial classification in 1772 and remains so today. The Disznókő estate consists of a single tract of land that spread over 250 acres at the south-west entrance of the Tokaj region. Four of the approved noble grape varieties are planted in this single vineyard – Furmint, Harslevelu, Zeta and Sagamuskotaly. The estate is essentially a hill of volcanic clay soil with perlite pebbles: at the top of the hill is the boar-shaped rock from which the estate takes its name, and the vineyards are arranged down the southern slope, with the winery at the bottom of the slopes. The vineyard is protected by the cold northern winds by the Zemplén hills right behind it, and draws light and heat from its southerly exposure. Acclaimed as one of the three most favorable sites of Aszu in Tokaj. Morning autumn mists and warm breezes ensure optimal conditions for noble rot. The Botrytis develops, concentrating the natural sugars, flavors and acids in the grapes. The wines gain their fire from the mineral-rich volcanic land, rhyolite-tuff with clay soils. In 1992, the estate was acquired by AXA Millésimes and many improvements were made: the vineyards were rehabilitated and replanted, old buildings were refurbished, and new state-of-the-art wine making facilities were constructed. The new winery pays homage to the nearby old winery and inside it's apparent how Disznókő has, above any other estate in the region, restored Tokaji's reputation to the days it was considered "the wine of kings and king of wines" (Louis XIV).

Wine Advocate 92 “Tasted at the Disznoko vertical in London, the 2011 Tokaji Aszu 5 Puttonyos is 100% Furmint (Aszu grapes). It has an expressive and

Wine Enthusiast 93 " A brilliant deep-gold color in the glass, this alluring Tokaji draws you in with heady aromas of dried pear, honeyed apricot and