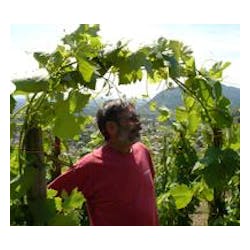 In the world of wine, there are many good winegrowers. However, there are only a very select few who are truly great, and Auguste Clape is among them. Critics and connoisseurs alike all agree that he is one of the greatest pioneers of the Northern Rhône, and his Syrahs from the cru of Cornas are among the most celebrated wines of France. The Clapes have been vignerons for many generations, but the infamous grower strikes of 1906 and 1907 forced his grandfather out of the Languedoc and into the Northern Rhône to start anew from practically nothing. The Clapes rebuilt their fortunes, terrace-by-terrace, along the steep, western slopes of the Rhône River. For many years, the majority of growers in Cornas sold their fruit to négociants. Auguste was the first to bottle his own wine, which eventually paved the way for such contemporary superstars as Thierry Allemand. Without pretense or fanfare, Auguste, the former mayor of Cornas, is a stately picture of grace and magnanimity--a no-nonsense wise man who is still interested in learning. Today, he works side-by-side with his son, Pierre-Marie, and grandson, Olivier.

Wine Advocate 92-94+ "Even the "early-drinking" 2019 Cornas Renaissance needs some time in the cellar. It's full-bodied, dense and tannic, with notes of horse liniment and

Though the Clapes farm only eight hectares, the challenge presented by the rough, tightly stacked terrace vineyards of Cornas is largely enough to handle by

James Suckling 99 "Plenty of sexy graphite and dark stony aromas cast across showy dark fruits seen here, all presented in a vibrant and

August Clape is considered one of the kings of the northern Rhône and with this Cornas, you will see why. Made from 100% Syrah, grown

A Syrah made from 15-year-old vines planted in granite-based soils. The Vin des Amis is intended for earlier consumption and will give you an idea

Wine Advocate 93-97 For the 2016 Cornas, a couple of the foudres I tasted from were truly amazing, like the Sabarotte, which is imbued with the

Wine Advocate 91-94 I tasted from several foudres earmarked for the 2016 Cornas Renaissance. All showed good ripeness and richness allied to ample fruit and balanced

Wine Advocate 95-97 The two Cornas releases in 2015 are head-turners that warrant serious attention. The flagship 2015 Cornas comes from the older vines of the

Wine Advocate 92-94 The two Cornas releases in 2015 are head-turners that warrant serious attention. The 2015 Cornas Renaissance comes from the younger vines of the

Wine Advocate 94-96 " Also gorgeous, and a wine that will be approachable at a slightly earlier date than the straight Cornas, the 2012 Cornas Renaissance

Wine Advocate 93 "The 2009 Cornas are off the charts. For example, the black/purple-colored 2009 Cornas Renaissance smells like a butcher shop with loads of bloody