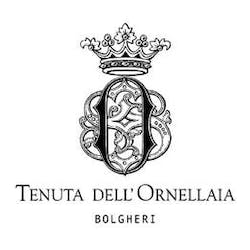 Tenuta dell'Ornellaia was established by Marchese Lodovico Antinori of the Antinori family, behind one of Italy's most historic negociant firms,[3] with the help of winemaker Tibor Gál. The property is adjacent to Tenuta San Guido, producer of Sassicaia which is considered the seminal "Super Tuscan", and Ornellaia has been suggested to be Lodovico Antinori's competitive answer to his cousin Nicolò Incisa's Sassicaia, and his older brother Piero Antinori's Solaia.[4] The vineyards of the estate were planted in 1981, producing the first vintage in 1985.[5][6] A modern winery was built in 1987, and a second 56-hectare (140-acre) property was later added, Bellaria, situated north of Bolgheri. Robert Mondavi Winery took a minority interest in the estate in November 1999, and were full owners by 2002, while initiating a partnership with the Frescobaldi family.[7][8] In April 2005, Frescobaldi bought the remaining 50% shares of Ornellaia from Constellation Brands after their acquisition of Mondavi holdings, coming to own the whole estate.[9][10] Axel Heinz is the current winemaker with Michel Rolland, involved with the estate since its beginning, is retained as consultant oenologist.[11] The sequence of ownership is featured in Jonathan Nossiter's film Mondovino and documentary series of the same name, which contain statements by Lodovico Antinori, and the Frescobaldi and Mondavi families then joint owners during the time of production, which displays opposing accounts on the events.[12] A Salmanazar (9-litre bottle) of Ornellaia 2005 was sold for USD$ 33,600 at Christie's of New York

Decanter 93 Bright and young on the nose, smells like freshly-picked red cherries, almost like sweets, blackcurrant and cherry sweets braced by bramble fruits and soft

Vinous Media 91 "The 2019 Le Volte dell’Ornellaia is terrific. Bold, juicy and wonderfully expressive, the 2019 will drink well right out of the gate. Juicy

James Suckling 93 "Theres purity of fruit here with crushed plums, flowers, fresh sage and rosemary on both the nose and palate. Its full-bodied, yet soft

Wine Advocate 92 "Lots of big, dark fruit and a lack of water in the grapes define the unique personality of the 2017 Le Volte dell'Ornellaia.

Wine Advocate 91 You get excellent value with the entry-level 2016 Le Volte dell'Ornellaia. This vintage radiates freshness and sheer energy, thanks to the excellent material

Wine Advocate 100 Masseto has pulled off back-to-back home runs. This is the first time that an Italian wine has earned 100 points in successive vintages.

James Suckling 94 Plenty of blackberry and rust with tile and stone undertones. Full body, tannic and structured. A big and flavorful red. Better in 2020

James Suckling 92 A fine-grained and focused red with berry, coffee and spice aromas and flavors. Medium body and a clean finish. Extremely pretty and delicious

James Suckling 98 The blackberry and blueberry aromas with fresh sage and bay-leaf character are impressive. Stone, graphite and mineral undertones. Full body and silky and

Robert Parker 96 "This wine will be released in May 2016. The 2013 Bolgheri Superiore Ornellaia is an integrated and seamless blend of Cabernet Sauvignon, Cabernet

" Le Volte dell’Ornellaia is the expression of a carefully crafted blend. The cuvée brings together the best terroirs of Tuscany and combines the Mediterranean

" 50% Merlot, 30% Sangiovese, 20% Cabernet Sauvignon The 2011 harvest was late, but it was characterised in particular by clean, crisp aromatics. Le Volte dell’Ornellaia

Wine Advocate 98 "The 2010 Masseto is truly monumental, leaving you breathless and wordless all at once. Once you sip the wine, it takes a few

" 50% Merlot, 30% Sangiovese, 20% Cabernet Sauvignon The 2010 harvest was late, but it was characterised in particular by clean, crisp aromatics. Le Volte dell’Ornellaia

Wine Advocate 89 "The 2009 Le Volte is a pretty, radiant wine laced with expressive bright fruit. It shows the generous, inviting nature of the year

Robert Parker 97 The 2006 Ornellaia flows from the glass in a profound expression of ripe, dark fruit. With time in the glass layers of minerals,

Robert Parker 94 "The 2005 Masseto (Merlot) is simply gorgeous. A wine of extraordinary class and personality, it remains very primary in its dark fruit, licorice,