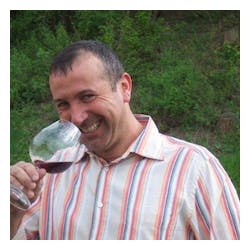 Five generations of Fenocchios have been producing wine from their holdings in the heart of the Bussia in Monforte d'Alba since 1894. Most of the production was sold locally up until 1964, when the ambitious and energetic Giacomo Fenocchio took over for the estate. His goal was to make the finest wines in all of Barolo, so he purchased prime parcels in some of the best crus in the Langhe – including Villero in Castiglione Falletto and Cannubi. Today, Giacomo's son Claudio has taken over winemaking duties for the estate, continuing his father's tradition of making pristine wines from the greatest vineyards in Barolo. Use whichever word you want, minimalist, traditionalist, non-interventionist, – all that matter is that Claudio's wines exhibit a level of terroir clarity that is only found in the top echelon of producers. If you're looking for the next star winemaker in Italy, look no further. Just recently, The New York Times rated Fenocchio number 2 in a tasting of Barolos – coming behind only Elio Altare and ahead of Elio Grasso, Massolino, and Vietti. Claudio manages some 7 hecatres of vineyards in Barolo, Castiglione Falletto and of course, the Bussia of Monforte. Total average annual production is about 3,000 cases. With prices that frankly do not come close to approximating the astronomical quality of the wines, it's painfully obvious that Fenocchio should be on the radar of Barolo lovers everywhere. Farming Practice:Sustainable

James Suckling 97 # 43 Top 100 Italian Wines "Such beautiful aromas with sweet-berry and floral character. Some cedar and sandalwood, too. Full-bodied with firm, round tannins.

Wine Spectator 91 "This red is saturated with black cherry and blueberry flavors, accented by ink and tar. Pure, with plenty of grip on the back

Vinous Media 95 "The 2016 Barolo Bussia is a wine of tremendous character and complexity. Menthol, lavender, black cherry, graphite, cloves and leather all open up

James Suckling 96 "An elegant, flinty nose that offers fine, bright and fragrant red fruit, from strawberry through cherry into plum territory. It also offers a

Wine Spectator 91 "This is a touch earthy yet concentrated and dense, sporting blackberry, pomegranate and black pepper notes. The finish is fluid, with a lingering

Wine Enthusiast 93 "This opens with aromas of sour cherry, violet and grilled herbs with a whiff of pipe tobacco. The linear palate is firmly structured

James Suckling 97 "Wow. This is so perfumed and beautiful with scents of berry, walnut, dried herb and cherry. So subtle. Full body, super integrated tannins

James Suckling 96 "Wonderful Cannubi with depth, texture and style. Full and harmonized. Superb length and beauty. A joyous wine that shows the class of the

James Suckling 92 "A Barolo showing the tight and fruity style of 2012 with strawberry and cedar aromas and flavors. Velvety tannins and a flavorful finish.

James Suckling 95 "A refined and incredibly balanced wine with cedar, berry and milk chocolate character. Full-bodied yet so silky and beautiful. Hard not to drink

James Suckling 95 "A refined and incredibly balanced wine with cedar, berry and milk chocolate character. Full-bodied yet so silky and beautiful. Hard not to drink