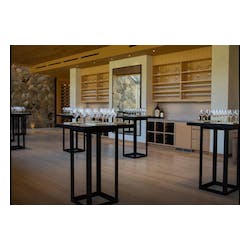 The story of Stag's Leap Wine Cellars is now legendary. Founded in 1970, the winery was thrust into the spotlight when a bottle of the 1973 Cabernet Sauvignon from the Stag's Leap Vineyard won the now-famous 1976 Paris Tasting, besting some of France's greatest wines. The historic tasting, which has become known as the Judgment of Paris, fundamentally transformed how California wines were viewed worldwide. And the stunning victory over renowned wines of Bordeaux launched Stag's Leap Wine Cellars into the ranks of the world's most noteworthy Cabernet Sauvignon producers. Over the years, the wines of Stag's Leap Wine Cellars have become some of the most highly regarded and collected wines worldwide. The winery is also recognized for its Napa Valley Collection of wines including ARTEMIS Cabernet Sauvignon and KARIA Chardonnay. Estate fruit combines with grapes from other distinctive sites , adding layers of flavors and complexity. Together, they create wines that express the regional character of Napa Valley with the signature style of Stag's Leap Wine Cellars. It's an approach that results in wines of lush fruit balanced by extraordinary structure and elegance.

The 2018 Artemis Cabernet Sauvignon delivers expressive aromas of ripe raspberry, dark cherry and blackberry along with hints of cedar and spice. The mid-palate is

This Napa Valley red wine blend offers aromas of boysenberry, fig and red currant along with hints of clove and dried fruit. On the palate,

Decanter 91 Sourced from sites in Oak Knoll, Calistoga and an area northeast of Napa itself called Wooden Valley. Its a quintessential Napa Sauvignon Blanc, with

This is a graceful Chardonnay with generous aromas of Asian pear, honeydew melon and lime along with a touch of hazelnut and vanilla oak. Medium-bodied,

Wine & Spirits 95 "As Stag’s Leap Wine Cellars sets out to celebrate its 50th anniversary, this vintage of Fay cabernet may be the best wine

This Napa Valley Chardonnay delivers inviting aromas of pear, pineapple, and orange blossom with a lifted floral note. Medium bodied, the wine has a soft

The 2018 ARTEMIS Cabernet Sauvignon delivers expressive aromas of ripe raspberry, dark cherry and blackberry along with hints of cedar and spice. The mid-palate is

This Napa Valley red wine blend offers aromas of boysenberry, fig and red currant along with hints of clove and dried fruit. On the palate,

Wine Enthusiast 91 This has 10 Sauvignon Musqu, 3 Smillon and 1 Muscat Canelli. Together, the grapes provide an experience of floral melon, stone fruit and

Wine Advocate 90 “The 2017 Chardonnay Karia features grapefruit, lime cordial and orange blossoms with marzipan and beeswax hints on the nose. The palate is medium-bodied

Wilfred Wong 92 “COMMENTARY: While Stag's Leap Wine Cellars continues to be the star from this portfolio, the white wines are coming on strong and much

Wine Advocate 90 " The 2016 Chardonnay Karia is scented of green apples, lemons and orange blossom with a waft of peach kernels and lightly browned

“This Napa Valley red wine blend offers aromas of boysenberry, fig and red currant along with hints of clove and dried fruit. On the palate,

Jeb Dunnuck 93 “Ripe blackberries, black cherries, spice, and a beautiful floral quality all emerge from this medium to full-bodied effort. With some creamy oak, sweet

Wine Advocate 95 A barrel sample, the 2015 Cabernet Sauvignon Fay Vineyard is deep garnet-purple in color with an earthy/herbal nose of black cherry and blackberry

"The 2015 AVETA Sauvignon Blanc offers inviting aromas of orange blossom, tangerine and a hint of grass. On the palate, the wine has bright citrus

“This Napa Valley red blend offers pleasing aromas of spiced plums and boysenberry with hints of tobacco and black tea. Rich in texture, this wine