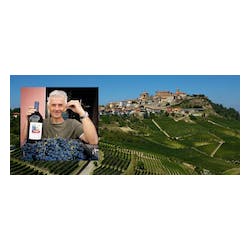 If there were a demigod in Barolo today, or should we say La Morra, it is Roberto Voerzio. His path to success has been based on what are considered to be the lowest yields of fruit in the Barolo zone. Production is very limited and the winery makes less than 4000 cases per vintage, which equals less than one bottle per vine. He's a modernist to the extent that he fashions his wine away from the traditional tannic Barolo style, not overly extracted and oaky. This is an Italian cult winery at its finest. Roberto and Gianni Voerzio inherited their holdings from their father Gianni, who bottled wines under his own name until the early 1980s. Today, they make wines separately a few hundred yards apart, with Roberto and his wife operating six plots of Barolo vines in La Morra.

James Suckling 100 "What a surprise. Best La Serra ever from here. Perfection. This is really ripe, with dark and dried fruits. Almost raisiny, with grilled