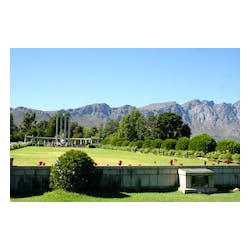 In 1652 Jan van Riebeeck, a Dutch surgeon, eager to find a way to relieve the symptoms of scurvy, suggested to the Dutch East India Company that the Cape Province of South Africa would be suitable for growing grapes. Nine years later the first wine was pressed from grapes grown on cuttings brought from France. The prime grape growing areas of South Africa spread out from Cape Town, and include the Paarl ('pearl' in Afrikaans), which to the east encompasses Franschhoek ('French corner') home of the first French Huguenot settlers. Boekenhoutskloof, its homestead dating from 1784, is located in the Franschhoek Valley. The owners of Boekenhoutskloof have revamped an ancient cellar, and have installed state-of-the-art equipment as well as a quality maturation cellar. Marc Kent is the winemaker for the Boekenhoutskloof wines as well as the Porcupine Ridge, Wolftrap, and Chocolate Block ranges of wine. This range of delicious, everyday wines is a firm favourite on tables throughout the world – offering great value and superb drinking. The range is proudly named after the Crested Porcupine, a most unique and fascinating inhabitant of the farm. Boekenhoutskloof is also involved in its conservation through a research project – learn more by visiting www.porcupinequest.com.

The nose is vibrant and inviting with its aromas of apple, lime, and greengage and subtle whiffs of lemon verbena and elderflower. The palate shows

“The nose is bold and sophisticated, offering an abundance of dark plums, violets, cured meat, and black olives. The perfume of the nose follows through

Wine & Spirits 90 "This is so juicy and welcoming it would be easy to gulp it down without noticing the detail, but its worth taking

“The nose is fresh and intense with an abundance of granadilla, pineapple, ripe fig, melon and citrus aromas. The mid-palate is gentle and round, showing

Wine Spectator 88 Supple and smoky, with a light alder note threading around the core of plum cake and steeped cherry flavors. Presents lingering whiffs of

" Fresh pungent flavours of tropical fruit, nettles and notes of green grass. Complex on the palate with some minerality and a good balance between