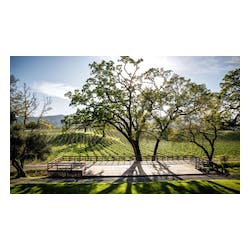 "A bold, rich Cabernet with aromas of cassis, black cherry, mint and violet combine with a bouquet of pungent oak, anise and warm vanilla. On

"A bold, rich Cabernet with aromas of cassis, black cherry, mint and violet combine with a bouquet of pungent oak, anise and warm vanilla. On

"A bold, rich Cabernet. Aromas of cassis, black cherry, mint and violet combine with a bouquet of pungent oak, anise and warm vanilla. On the

A bold, rich Cabernet with aromas of cassis, black cherry, mint and violet combine with a bouquet of pungent oak, anise, and warm vanilla. On

" Rich flavors of berry, cassis and black cherry with hints of vanilla in the background. 100% Cabernet Sauvignon aged in French Oak." ~Winery Notes

" The warm 2008 growing season, along with a very low crop and smaller concentrated berries yielded us one of our best Cabernets to date.

Wine Enthusiast 88 "A very nice 100% Cab that will benefit from 35 years in the cellar. Right now, its locked down in tannins, with an

"The 2005 B.R. Cohn SyrCab is a blend of Cabernet Sauvignon from the B.R. Cohn Olive Hill Estate Vineyard and Syrah grapes grown in specially selected Sonoma

"The warm 2005 growing season, along with a light crop and small concentrated berries at B.R. Cohn Olive Hill Vineyard, yielded us one of our best Cabernets

Wine Enthusiast 93 "This bottling has got to be one of the most seriously underpriced Cabs in California. What you get is a firmly structured, tannic,

Wine Enthusiast 90 "This wine typically starts life out as a young, tannic puppy, and although it has ripe flavors and a suppleness that can handle