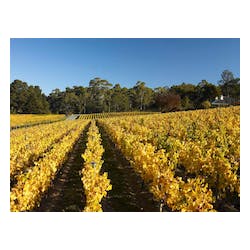 In every way The Tiers Vineyard is a "distinguished site". It is the first vineyard planted in the Adelaide Hills thus pioneering the true cool climate wine industry of South Australia. The Tiers Vineyard is in the second coolest and the wettest location in South Australia, the Piccadilly Valley. It is absolutely suited to Chardonnay being an almost perfect homo-clime of Burgundy and especially mirrors the southern end of the Cotes de Beaune where the great Montrachets are grown. The soil is unique in the Adelaide Hills being based on the 1.6 billion years old Calcsilicate geological stratum lifted into place by a fault at the edge of the Tiers Vineyard that places it next to the 500 million year old geological strata that prevail in the rest of the Piccadilly Valley. The Tiers Vineyard tilts gently to the north and east in a sheltered valley that takes best advantage of the autumn sun in the northern sky to extract the last rays of ripening energy at the cool end of the harvest. It has been planted on an intensive vine regime and managed fastidiously by hand on a vine-by-vine basis. The vines are now over 30 years old and in perfect balance with their environment at the low crop level of 6 tonnes/hectare. BeginningsThe Croser family planted the Tiers Vineyard in 1979, the first vineyard planted in the Adelaide Hills region in the 20th century. The Tiers Vineyard is in the centre of the Adelaide Hills in the middle of the Piccadilly Valley sub-region, the coolest and highest rainfall viticultural location in South Australia and one of the few genuine homo-climes of Burgundy in Australia. When Brian and Ann Croser took their young family to the Piccadilly Valley in 1978 to establish the Petaluma winery, they purchased the 7 hectares property that they named The Tiers as their home and the site for a revolutionary Chardonnay vineyard. The property was named The Tiers in recognition of the 1836 name the pioneers gave to the central Adelaide Hills as seen from the Adelaide plain. The original name for the Piccadilly Valley was the Tiers Valley. The 3 hectares of adjacent low-lying land was purchased by Petaluma for the establishment of the winery.

Wine Enthusiast 93 "'Brian Croser's efforts with Tiers Vineyard Chardonnay have finally paid off in a big way. This is a plump, amply textured wine that