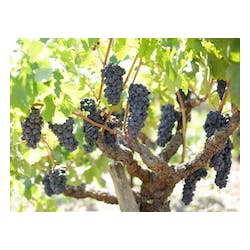 "Carlisle Winery & Vineyards is the realization of a dream for long time home winemakers Mike and Kendall Officer. After a decade of producing award-winning wines at home for family and friends, they crushed their first "commercial" grapes in 1998. Focusing on Zinfandel and Rhone-based varieties, their goal is simple but ambitious: to produce small lots of world-class wines from some of California's most exceptional vineyards. To help achieve this goal and ensure a continuous source of high quality fruit, Mike and Kendall also purchased one of Russian River Valley's benchmark old-vine Zinfandel vineyards. Planted in 1927 by Italian immigrant Alcide Pelletti (with some occasional direction from his father-in-law Giuseppi Frati), they began producing wine from that site in 2001. Additionally, they have secured a nearby two-acre, predominantly Mourvèdre vineyard planted in 1910, and several other old-vines Zin vineyards, which they meticulously farm themselves."

Jeb Dunnuck 97 "The 2017 Zinfandel Papera Ranch comes from a site close to the Mancini Ranch and vines planted in 1934. Notes of plums, blueberries,

Wine Advocate 95 "A blend of 89% Zinfandel mixed with about eight different other varieties, from vines planted in 1926, the medium to deep garnet-purple colored

Vinous Media 97 "The 2016 Zinfandel Papera Ranch is another exceptional wine. Vivid, nuanced and wonderfully alive, the 2016 is all finesse. Beams of supporting tannin

Jeb Dunnuck 96 "Checking in as a blend of 55% Syrah and 45% Mourvèdre, the 2016 The Integral has a touch of Cornas-like meatiness to go

Robert Parker 94 "Another monster in the making is the 2015 Petite Sirah Palisades Vineyard (15.7% alcohol, 580 cases). This is no ordinary Petite Sirah, but

Robert Parker 94 "A killer effort is the 2015 Zinfandel Papera Ranch, from a vineyard planted in 1934, and made from 96% Zinfandel and 4% Carignan.

Wine Enthusiast 94 "EDITOR'S CHOICE-2014 proves another banner year for this delightful blend of Sémillon from Monte Rosso Vineyard, Muscadelle from Pagani Ranch and Palomino and

Wine Spectator 96 "Zinfandel doesn’t get much better than this. Rich aromas of black raspberry and orange zest open to balanced, complex and luxurious flavors of

Vinous Media 95 "The 2014 Petite Sirah Palisades Vineyard emerges from one of the best sites for Petite in California. All the classic signatures of Palisades

Wine Advocate 95 "Even better, the 2014 Syrah Sierra Mar Vineyard might be the top Syrah out of this vineyard. Also inky and glass-staining, it offers