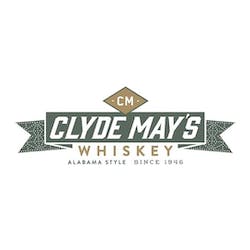 Conecuh Ridge Alabama Fine Whisky is a recreation of an aged moonshine whiskey which was produced illegally in Alabama during the mid to late 20th century. It was produced by Alabama moonshiner and bootlegger Clyde May. It's estimated that he produced about 300 gallons a week in his still in the woods near Almeria, Alabama. His whiskey was known for its high quality relative to typical moonshine. Much of his production was sold as simple unaged corn liquor. But a certain portion was aged in charred barrels for about a year with a couple of dried apples for flavor. Mr. May bottled this aged whiskey and gave it to friends and valued customers as "Christmas Whiskey". Always operating outside the state liquor laws, Clyde May spent 18 months in jail beginning in 1973. Clyde May died in 1990 and his son, Kenny worked to figure out how he could produce the "Christmas Whiskey" legally as a tribute to his father. Using his father's recipe, and Alabama Conecuh Ridge spring water, Kentucky Bourbon Distillers, Ltd. of Bardstown, Kentucky produced 4,000 bottles in 2002. Under the watchful eye of master distiller Even Kulsveen, Kentucky Bourbon Distillers, Ltd. produced the mash (crushed grains such as corn, wheat, and rye) using Clyde May's recipe and Conecuh Ridge spring water trucked in from Alabama. The product was distilled, aged in charred white oak barrels, bottled, and returned to Alabama for distribution. Though produced in Kentucky, the water and the recipe were pure Conecuh Ridge. On February 17, 2004, Representative Alan Boothe introduced House Joint Resolution No. 100 into the Alabama House of Representative. In short time, the Resolution was approved by the House by voice vote and sent on to the Alabama Senate for their consideration. The Senate received House Joint Resolution No. 100 on February 26 and voted to approve it by two to one (14 Yeah, 6 Nay) on March 9. On March 11, 2004 House Joint Resolution No. 100 was certified by the Clerk of the House. It was passed on to Governor Bob Riley for his signature on March 18. Unfortunately, Governor Riley vetoed the Resolution that had been passed overwhelmingly by the Alabama State Legislature charging that Alabama "should not set a precedent of endorsing a commercially sold product." 1 Kenny May was disappointed, but the Alabama Legislature acted quickly and in a rare move overrode Governor Riley's veto by a vote of 54-7 in the House on March 18 and 19-8 in the Senate on April 6. On April 8, 2004 the Clerk of the House certified the actions of the Alabama Legislature and House Resolution No. 100 was assigned as Act No. 2004-97. Conecuh Ridge Alabama Fine Whiskey was declared, by Resolution, Alabama's Official State Spirit.