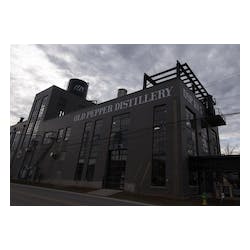 The Pepper family brand of whiskey is an iconic Kentucky whiskey brand initially produced during the American Revolution and continued through 1958. The family built and operated two main distilleries: first founding the site that today hosts the Woodford Reserve Distillery, and later the James E. Pepper Distillery in Lexington. In the late 1950s the bourbon industry hit hard times, and both the brand and distillery in Lexington were abandoned for over half a century.In 2008 the brand was relaunched by whiskey entrepreneur Amir Peay. A decade-long campaign of thorough historical research and collection of historic materials was used to retell the lost story of this iconic American whiskey brand and to distill new stocks of "Pepper" whiskey (visit the History Page to learn more). To initiate the relaunch of the brand, partnerships with existing distilleries were formed. Today the whiskey sold under the 1776 line of whiskeys was distilled years ago in collaboration with the historic Lawrenceburg Distillery in Indiana. After a multi-year construction effort, the historic James E. Pepper Distillery--which after fifty years of neglect had fallen into a terrible state of disrepair--has been completely rebuilt and restored. In December 2017, the distillery once again began distilling whiskey. Learn more about the distillery project on our Distillery Page.