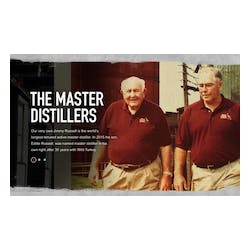 Russell's Reserve Small Batch Straight Kentucky Bourbon and Rye Whiskey. Master Distiller Jimmy Russell and his son, Eddie have 90 years of making bourbon the old fashioned way in Lawrenceburg, Kentucky. They don't compromise and insist that good bourbon (whiskey) is only aged in the deepest, "alligator" char American White Oak barrels. After 10 years of aging in the center cut of the rick house, a committee of two, that's Jimmy and Eddie, decide which barrels will become Russell's Reserve Straight Kentucky Bourbon. It's the only bourbon (whiskey) they put their name on.Asked why he doesn't compromise on making bourbon, Jimmy responded, "because it's the right thing to do".

" Russells Reserve Single Barrel delivers a burst of intense vanilla and hints of burnt orange, along with tastes of licorice and anise seed, culminating

" Rye Whiskey is booming, and legendary Master Distillers Jimmy and Eddie Russell are responding the only way they know how a 104 proof,

Russell’s Reserve 1998 is a 102.2 proof, non-chill filtered Bourbon which has been matured in the distillery’s timber rickhouses. Given tasting notes include dried apricots, pears,