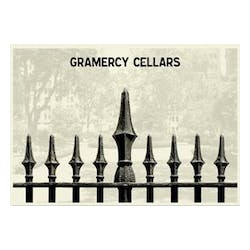 Master Sommelier Greg Harrington spent his career overseeing some of the most prestigious wine programs in the country. Since passing the exam at 26 years old (the youngest person ever at the time) he couldn't get the idea of making wine out of his head. In 2004 he attended an event featuring the wines of Walla Walla and he was immediately hooked. He worked harvest that fall and in 2005 he launched his own winery, Gramercy Cellars. Since he didn't own vineyards of his own, he sought out the best sources he could find to make his wines. He also wanted grapes that weren't overripe so you wouldn't lose the distinctive terroir of Walla Walla. In the cellar he favors minimal handling, stem-inclusion, and light use of new oak, all to preserve the character of the fruit and the vintage. The resulting wines are restrained, balanced, and complex. They age well but also possess enough fruit to be rewarding when young. Gramercy Cellars was founded in the hope of capturing what first caught Greg's attention: the distinctive voice of Washington wines. With each vintage he further proves that it has been a success.

Wine Enthusiast 91 "Phinny Hill (60%) and Bacchus (20%) fruit make up the backbone of this wine. Aromas of plum, black licorice, baking spice and black

Jeb Dunnuck 98 “Always one of my favorite releases from this estate, the 2015 Syrah Lagniappe is 100% Syrah (mostly from the Red Willow Vineyard in

Syrah has long been the star at Gramercy Cellars. The Lower East Syrah combines the freshness and acidity of Yakima valley's vineyards with the

Wine Advocate 94-96 “Checking in as a rough blend of 95% Cabernet Sauvignon, 4% Cabernet Franc and a splash of Petit Verdot, the inky colored 2014

Wine Advocate 91 "Peppery herbs, underbrush, hints of olive tapenade and black fruits all emerge from the 2014 Syrah Lower East, and it's a juicy, delicious,

Wine Enthusiast 92 "There's no mistaking the variety, with plentiful aromas of fresh herb and cherry alongside vanilla and light barrel accents. The dark fruit flavors

Wine Advocate 94 “The 2012 Cabernet Sauvignon is most likely the greatest vintage of this cuvee to date. Full-bodied, ripe, layered and yet still elegant

Wine Enthusiast 94 "This wine is a blend of four distinctive sites-Minick and Olsen in the Yakima Valley, and SJR and Stoney Vine in the Walla