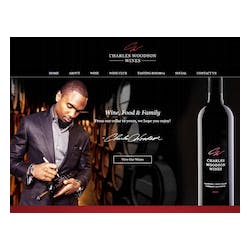 Charles Woodson Wines is a project that emerged from curiosity, friendship and a desire to spread good fortune. Charles Woodson discovered his appreciation for wine in 1998 when he arrived in Napa with the Oakland Raiders for training camp. He was intrigued when he noticed that everywhere he went people were enjoying a bottle of wine. It didn't matter if it was an opulent dinner, low key lunch, or lazy afternoon. He was drawn to the fact that people seemed to slow down and come together over a glass of wine. Being the curious type, he not only wanted to participate in this ritual, he wanted to learn how to create it himself. In 2001 Charles, met Rick Ruiz who was working at Robert Mondavi Winery. Rick invited Charles to visit the winery and showed him around the cellar while explaining the winemaking process from start to finish. In that moment, Charles' desire to actually make a wine was launched. The two worked together with another friend – who happened to be acclaimed international winemaker, Gustavo A. Gonzalez – to create the first barrel of Charles Woodson Wines. They produced a 2001 vintage Merlot that was used to support the various charities with which Charles is involved. Gustavo A. Gonzalez, Winemaker Gustavo A. Gonzalez brings over fifteen years of winemaking expertise to the Charles Woodson Wines team. After studying at the University of California, Berkeley and Davis, he began his career at Robert Mondavi Winery where he laid the foundation for professional success. Gustavo's experience rivals that of most in the industry. He has had the opportunity to work alongside some of the world's best winemakers and continues to expand and enhance what he has learned as he develops his own distinct style. His ability to speak five languages, coupled with his exhaustive understanding of how to coax the best wines from any grape varietal has opened doors to an international career. In addition to Charles Woodson Wines Wines, he works on projects in Burgundy, Argentina, Brazil, Italy and Spain. Completely hands on, Gustavo is involved in every step of the production process from vine to bottle. Having such an intimate knowledge of winemaking procedures and success in developing processes and protocols has led Gustavo to participate in the designs of winemaking facilities domestically and abroad, including the first gravity flow winery in Brazil. The incomparable winemaking proficiencies and quality standards that Gustavo has brought to Charles Woodson Wines can be tasted in every bottle.Our Vineyard and Farming Practices The Charles Woodson Wines vineyard is farmed with the same artisanship, precision and delicate care that is at the core of the winemaking philosophy. After an in-depth sourcing process that led Charles Woodson and the winemaking team through some of the most coveted vineyards in the Napa Valley, the site exhibiting the highest potential to define Charles Woodson Wines as a wine of structure and elegance was selected. The chosen vineyard, owned by Heitz Bros. Vineyards, has a pedigree as exclusive as its northern Napa Valley location. The original vines were planted in 1904 by Michael and Louise, the grandparents of the current Heitz Bros. owners. As recent immigrants from the Alsace region of what was then Germany, now France, the couple wanted to find a place where they could raise a family while putting Michael's horticultural background to use. The result of their search was the purchase of 50 acres of prime Napa Valley soil located at the base of Diamond Mountain, just two and a half miles south of the town of Calistoga. Michael made an assortment of wines from the original vines which included varieties such as Zinfandel, Petite Syrah, and Charbono. This section of land is still held by the Heitz family and is managed by one of the third generation brothers, Mark. A true farmer, Mark does not make wine. He prides himself on focusing solely on the grape growing process which allows him to direct all of his time and attention toward cultivating the highest quality vines possible. After years of working in the soil and learning the climate conditions, Mark concluded that the most optimal varietals to grow in this site are of the Bordeaux family. The majority of his land is now dedicated to the production of Cabernet Sauvignon grapes that grow next to esteemed neighbors including Sterling, Clos Pegase and Schramsberg.