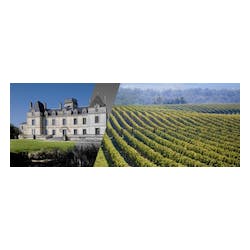 Domaines Barons de Rothschild (Lafite) has made excellence in the vineyard and wine-making practices the basis of its growth. Château Lafite Rothschild was the start of the DBR (Lafite) Group. It was the first Château acquired by the Rothschild family in 1868 and inspires and guides the winegrowing practices at the various vineyards: the expertise and the tradition upheld for five generations by the Rothschild family are applied to all of the properties with the objective of producing high quality wines full of finesse and elegance in the "Lafite Spirit"."The Lafite Spirit" is based on a rich past and a tradition rooted in the Bordeaux soil, on the handing down of knowledge from generation to generation and on the excellence and refinement of the wines that they help to produce. "The Lafite Spirit" is also the pioneering spirit which has led the Group to open up to the world, establishing vineyards in new regions and producing new, high quality wines.It is now the fifth generation of the Rothschild family, with Baron Eric de Rothschild at the head of Lafite and the DBR (Lafite) Group.Baron Eric de Rothschild has brought new drive to Château Lafite Rothschild through his commitment to achieving excellence both in the vineyard and in the winery.He is accompanied by Christophe Salin, President and CEO of Domaines Barons de Rothschild (Lafite), who has also contributed to the DBR (Lafite) Group's growth through acquisitions in France and internationally.

Wine Spectator 88 "Plump, with anise, plum and blackberry notes backed by a touch of sweet toast on the finish. Cabernet Sauvignon and Merlot. Drink now

"Deep crimson. Expressive and flattering on the nose, combining intense aromas of red berries (blackberry, Morello cherry) with toasty and vanilla notes. Round and fleshy,

Decanter 90 "Dark plum in color, this offers a very sweetly fruited, inviting nose, some toasted oak, caramel and woodsmoke. The palate has both sweet and

"The prestigious Barons de Rothschild (Lafite) family has owned vineyards in Bordeaux for generations. In addition to the wines issued from their world renowned vineyards,

"The summer of 2014 was rather gloomy, characterized by a lack of sunshine and low temperatures, but then beautiful weather arrived in the entire region

"Lafite Reserve Speciale is a deep purple with good intensity. Powerful and seductive, with aromas of ripe fruit (blackcurrants, Morello cherries) and hints of candied

"The Barons de Rothschild Reserve Speciale Bordeaux Blanc is a terrific wine for everyday drinking. It is a blend of 60% Semillon and 40% Sauvignon

"This KOSHER bottle is full of dark, juicy cassis fruit on the palate, with a note of fresh tobacco on the finish and solid, approachable