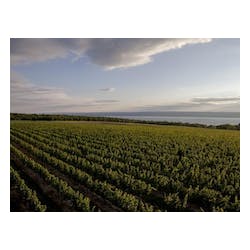 "Boundary Breaks is a vineyard located on the east side of Seneca Lake in the Finger Lakes AVA of New York. In 2007, owner Bruce Murray purchased a 120-acre farm that had been in the same family since 1850. Murray's goal was to develop a vineyard that could yield Finger Lakes Rieslings that were comparable to some of the great Rieslings of Germany and Alsace. The vineyard site is exceptional. There are 70 acres of open farmland that had previously been planted to row crops like corn and soybeans. The soils are characterized as "Cazenovia Silt Loam" which is tested at an optimal pH typical of calcareous soils. These soils are considered ideal for producing complex aromatic white wines. The focus for Boundary Breaks is exclusively Riesling. There are four wines that are made in four different styles ranging from bone dry to medium sweet. The styles also utilize different clones of Riesling. The focus and dedication of the project is a revelation in the region and one which is helping redefine the potential in the the Finger Lakes AVA."

"Bright with citrusy acidity, the aromas of sweet honeysuckle are balanced by a slightly dry minerality, and a lingering finish that makes us think of

"After the nuanced and quiet nose, flavors of juicy strawberry, mango and honeysuckle burst on the palate. Grey slate underscores the ripe strawberry flavors, while

"For this Bubbly Dry, we start with a very dry Riesling, cool it down near freezing, then add carbon dioxide. Crisp, refreshing, and exploding with

Wine Advocate 88 "The 2018 Riesling Reserve "No. 198 Single Clone" is made by Kelby Russell at Red Newt from Boundary Breaks' estate vines. It comes

"Our vineyard site is close to the shore of Seneca Lake which allows us to achieve maximum ripeness in our red fruit. This is a

Vinous Media 92 "This medium-dry feels akin to a good Mosel Spätlese. Light yellow in color. Gentle spring flowers, herbs and ginger on the nose. In

Wine Enthusiast 90 "Blended with 25% Merlot, this wine offers a mix of black- and red-berry aromas on the nose, with hints of peppercorn, tilled earth

Wine Advocate 92 "The 2017 Riesling Reserve "No. 198 Single Clone" is made by Kelby Russell at Red Newt from Boundary Breaks' estate vines. It comes

James Suckling 93 "Although this is still a bit closed, it has the same kind of exotic aromas (mango!) as the previous two vintages and the

"Our vineyard site is close to the shore of Seneca Lake which allows us to achieve maximum ripeness in our red fruit. This is a

James Suckling 90 "This is the "basic" bottling from Boundary Breaks, made only in part from estate fruit, but it has a full apple and blackcurrant

"Whiffs of herbs and green florals persist from start to finish on this elegant off-dry Riesling. The palate is lush with ripe white-peach flavor, but

Vinous Media 91+ "A pert, high-toned, and rocky wine the 2014 ‘OLN’ from Boundary Breaks is still quite young and wound-up. The nose offers scents of

Wine Advocate 89 "The 2013 Riesling "Ovid Line North" Single Vineyard is an unoaked blend of various clones with 33 grams per liter of residual sugar.

Wine Enthusiast 91 "A waxy vein of petroleum cuts enticingly through juicy-sweet pink grapefruit and peach flavors in this dainty semisweet Riesling. It's vivaciously spry yet

Wine Advocate 91 "The 2012 Riesling Reserve "No. 198 Single Clone" is unoaked with 54 grams per liter of residual sugar and 10% alcohol. Late harvested,