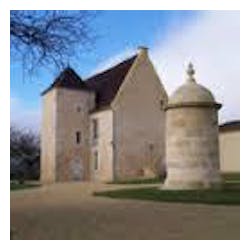 In the heart of Targon, 35 km South-East of Bordeaux, majestically stands the superb building of Château Vieux Manoir. Its construction dates back to the 11th century and shows the passing of several Bordeaux aristocratic families, who helped to shape and write the area's history over the centuries. The property was also the former hunting house of the Duke of Epernon. In 1989, the Ballande family fell under the spell of the estate and took it over with the ambition of restoring its former prestige. The rebuilding of the vineyard and the château began in 1990, done with great respect for its original character and authenticity.

Wine Enthusiast 90 BEST BUY "This rich wine is full of ripe fruits and some firm tannins that are already integrated. Full, warm and spicy, it

In the heart of Targon, 35 km South-East of Bordeaux, majestically stands the superb building of Château Vieux Manoir. Its construction dates back to the

Wine Advocate 87 “Sleeper of the Vintage” "A major sleeper of the vintage that sells for about $12.00 retail, this blend of 85% Merlot,