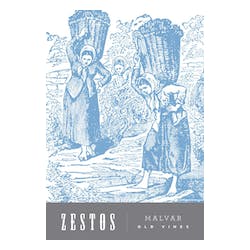 Zestos means 'basket' in English. Not too many years ago, baskets like the ones depicted on these labels were used to transport grapes from the vineyard to the wineries. If you love red wines of tension that exhibit purity and finesse or white wines of complexity and tremendous value you will find Bodega Zestos to be your new love. In the words of Robert M. Parker, Jr, the most influential wine critic in the world, Zestos is "A staggering value". Zestos produces from organically grown Malvar vines 35+ years of age and Garnacha vines that were planted in 1969 in the high elevation vineyards of San Martin de Valdeiglesias – northwest of Madrid. Zestos also produces wines in the southeast region of Madrid in the town of Arganda del Rey, within the Arganda subregion

WHAT MAKES THIS WINE UNIQUE? This wine presents the best of both worlds: the Malvar grape combines the acidity of Sauvignon Blanc with the body