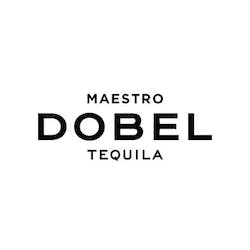 Dobel was created by and named after Juan-Domingo "Dobel" Beckmann, the eleventh-generation leader of Jose Cuervo tequilas, in collaboration with master distillers ("Maestros") Marco Anguiano and Luis Yerenas.[1][2] It was introduced in 2008.[3] Dobel is a blend of reposado, añejo and extra añejo tequilas, aged one, two and three years, respectively, in European white oak barrels, and then filtered to remove all color. The tequilas in the blend are distilled from 100% blue agave from a single estate in Jalisco, Mexico.[4][5] Technically considered a reposado, it is the first ever multi-aged clear tequila.[2][6] The original bottle had a crystal-cut glass design with a thick metallic base.[7] The current bottle is modeled after a 19th-century laboratory bottle.

" Introducing the worlds first crystal-clear aged tequila with the complexity of aged cognacs combined with the crispness of luxury vodkas. Dobel Tequila is a

"Fantastic flavor with notes of vanilla, coffee and oak. Amazingly smooth, with virtually no traditional tequila burn on the back end of the palate."