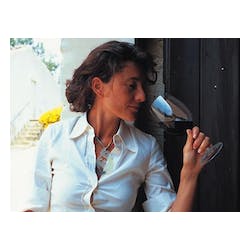 "The Sicilian winery of Valle dell'Acate has a long and storied history amongst the top estates in Sicily, as the Jacono family can trace back their winemaking roots here to the nineteenth century. It is located in the southeastern corner of Sicily, on the elegant Bidini Manor in the hills of the Dirillo Valley. The estate comprises over one hundred hectares of land, both for grapevines as well as Sicily's famous blood oranges. Under the direction of the current head of the family winery, the elegant Gaetana Jacono, many of the vineyards have been replanted to the great traditional grapes of Sicily which are farmed organically. The estate produces one of the finest examples of Cerasuolo di Vittoria, traditionally Sicily's greatest wine. Cerasuolo di Vittoria was the first red wine in all of Sicily to achieve DOCG status, and to this day it continues to be one of Sicily's greatest reds. Valle dell'Acate also makes a great many IGT bottlings from their well-tended vineyards, including Il Nero, Zagra, Il Frappato and Tané. All of the bottlings from Valle dell'Acate must be ranked amongst Sicily's finest. The estate's Cerasuolo di Vittoria is made of a blend of seventy percent Nero d'Avola and thirty percent Frappato, with the Nero d'Avola spending time in predominantly used barrique prior to bottling. The wine receives eight to nine more months of aging in bottle prior to release, allowing for the traditionally broad and velvety style of Cerasuolo di Vittoria to emerge prior to release. This is a full-bodied and complex wine, combining the dark spice notes of Nero d'Avola with the high-toned floral aspects of the Frappato. This harmonious blend displays supple tannins and sound acids to keep the wine fresh and bouncy on the palate. Valle dell'Acate's Il Frappato bottling is comprised, no surprisingly, of one hundred percent Frappato, and aged in stainless steel tank prior to bottling to retain this varietal's lively red-fruited, highly-aromatic and floral profile. As is typical of this grape, the wine is light to medium-bodied and delivers a lovely base of soil tones from the calcaire, sandstone and clay strata of soils that lie beneath the estate's vineyards. Their Il Moro bottling is a richer and more voluptuous style of red wine than the Il Frappato, as it is made from one hundred percent Nero d'Avola from the estate's best hillside vineyards, and is aged entirely in tank. It is characterized by more black fruity tones of blackberries, black cherries, as well as notes of new leather and a fine base of soil. Like the Cerasuolo di Vittoria bottling, it is held back for six to nine months after the mise to allow it to fully blossom before it is released. Valle dell'Acate's lineup also includes a lovely white wine, the lovely and floral Zagra bottling. Made from 100% Grillo, it is medium-bodied, deep and intensely flavored, with plenty of citrus fruit, lovely soil tones and a potpourri of floral scents in the upper register that recall jasmine and citrus blossoms. It is a beautiful, bone-dry white that works beautifully as an aperitif, with all seafood preparations and sings with vegetable pasta dishes. The new flagship bottling from Valle dell'Acate is their red IGT bottling, known as Tané. This is the only wine in the Valle dell'Acate portfolio that is not made entirely from indigenous grapes from Sicily, as it is made up of a mélange of Nero d'Avola and Syrah. The wine is aged for one year in one hundred percent new French oak barrels, and then receives an additional year of aging in bottle prior to its release. There are only five hundred cases made of Tané in a bountiful vintage, and this wine has proven to be very popular amongst fans of both Syrah-based wines and lovers of traditional Sicilian varietals. All in all, Valle dell'Acate produces an impressive array of complex and food-friendly wines that are amongst the very greatest to be found on the island."

Vinous Media 93 "Bright red. Inviting, perfumed aromas of violet, pomegranate, nutmeg and cilantro. Then lovely and lively in the mouth too, with similar flavors to

James Suckling 91 “Quite a complex grillo with a touch of smoke and dried pear, along with the typical lemon character of the variety. The palate

James Suckling 92 “A beautiful red with dried strawberry and citrus fruit undertones. Medium body, light tannins and a bright and fresh finish. I love the

Vinous Media 92 "Bright red. A fresh red fruit cocktail quality on the nose is utterly irresistible. Then quite spicy and floral on the palate, with

James Suckling 92 "Here is a red with pretty raspberry and floral components to the nose. Medium body, integrated tannins and a fine finish. It's all

NY Times 20 Wines Under $20 Winter Reds "With so much attention focused on the Sicilian region of Mount Etna, the wines of Vittoria are often

James Suckling 93 " The aromas are enchanting with cardamom, ivy and dark fruits. Subtle and fascinating. Full body, round tannins with a complex aftertaste of

" Valle dell’Acate’s Il Frappato bottling is comprised of one hundred percent Frappato, and aged in stainless steel tank prior to bottling to retain this