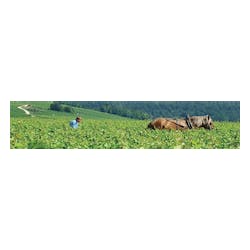 Considered the pinnacle of Burgundy, Domaine de la Romanée-Conti produces some of the world's most revered wines from its tiny vineyards in Vosne-Romanée. Two of the Domaine's seven grand cru vineyards -- La Romanée-Conti and La Tâche -- are monopoles and unarguably the greatest vineyards in Burgundy. Montrachet in Chassagne, Richebourg, Romanée-St.-Vivant, Grands Échézeaux and Echézeaux are also grand cru vineyards, yielding sublime wines that are among the most highly sought after, seductive and rarest in the world. "The Domaine's wines, particularly Romanée-Conti, La Tâche, Richebourg and in recent vintages Romanée-St.-Vivant, have an almost magical aura about them. Much of this stems from their consistent quality from vintage to vintage and their ability to age extremely well. They also transmit a sense of place, the fundamental notion of climat that is central to the character of great Burgundy. As such, each vineyard has its own distinctive character, structure and style." Wine Spectator, Bruce Sanderson

Decanter 98 The Romanée-Saint-Vivant was shown after the Richebourg, which was not always the case. The domaine farms 5.29 hectares here, the former holding of the

LA TÂCHE Nothing evokes La Tâche so much as the wonderful portrait of Richelieu by Philippe de Champaigne, which expresses the Cardinal’s fiery and angular authority,

Tim Atkin 98 The grand old lady' is how Bertrand de Villaine refers to La Tâche, now planted with 50-year-old vines and responsible for one of

Decanter 97 Bertrand de Villaine sometimes refers to Romanée-St-Vivant as 'monastic' and there can indeed be a taut, almost ascetic note to the wine when it’s

Robert Parker 98 "The 2015 La Tche Grand Cru is a young classic, soaring from the glass with an exotic and stunningly complex bouquet of dark

One of the lightest and most crystalline of the wines in colour, what this wine lacks in visual depth, it more than makes up for

The Grands Echezeaux is decidedly deeper and denser and more grande than the Echezeaux, showing more gravitas and depth of fruit. The nose is brimming

Decanter 96 The 2014 Romane-Conti is fabulous, bursting from the glass with a pure and projected bouquet of strawberry, raspberry, spice and peony. On the palate,

Decanter 93 The Romane-Saint-Vivant is supremely elegant in 2014, with a detailed and high-toned nose of strawberry, peony, pot pourri and a sweet framing of oak

Decanter 93 The Richebourg is the most overtly structured of the Domaine’s 2015s, revealing a pretty bouquet of wild strawberry, spice, licorice and creamy new oak.

Decanter 95 The Grands-Echézeaux is a very serious wine indeed in 2014, opening in the glass with an inviting bouquet of red cherry, cedary new oak,

Decanter 96 "With a beautiful ruby colour, the marvellous, multi-faceted aromas just jump out of the glass in an extraordinary expression of Pinot Noir that immediately

Neal Martin 92-94 "The 2013 Grands Echézeaux Grand Cru is probably more expressive than the Echézeaux on the nose with heightened delineation. Here there is wonderful

Wine Advocate 96 "The 2012 Romanée St Vivant, incidentally served before Richebourg rather than afterwards unlike previous years, was picked on September 28 and 29 at