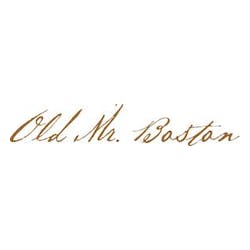 The distillery was founded in the Roxbury, Massachusetts neighborhood of Boston in 1933 by Irwin "Red" Benjamin and Hyman C. Berkowitz. Old Mister Boston was known for its collectible bottles such as the 1953 Presidential Inaugural Bottle. Over time, through a series of changes of ownership, the words "Old" and "Mr." were dropped from the name until it was known simply as "Boston."[1] The distillery was a major employer in the Boston area from the 1930s until its closing circa 1986 when the parent company, Glenmore Distillers, shut down operations and the brand vanished. The building that housed Old Mr. Boston's operations is owned by the City of Boston and is in use as a City Inspectional Services headquarters as well as housing other city agencies such as the Boston Public Health Commission and the Department of Transitional Assistance.

"Very dark reddish-amber hue and candied blackberry aromas with a spirity edge. A sweet, rounded entry leads to a medium-bodied palate. Made with all-natural fruit