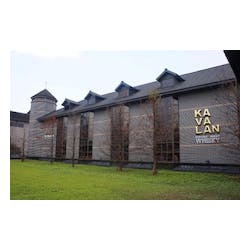 Construction on the distillery began in early 2005 and was completed in only nine months. The vision for the whisky was overseen by Master Blender Ian Chang in collaboration with world-renowned whisky consultant Dr. Jim Swan. The distillery is comprised of Scottish style copper pot stills from Scotland made by the Forsyths Company, as well as Holstein stills. Fermentation takes place in temperature-controlled stainless steel tanks to protect it from the sub-tropical climate of Taiwan. Kavalan began distilling trial runs in early 2006, with the first drop of new make spirit emerging from the stills on March 11, 2006, one year after construction on the distillery had begun. To combat the high heat and humidity of Taiwan, the spirit vapors are cooled using both tube condensers and sub-coolers. The five-story warehouse houses 30,000 casks tied together because of the high risk of earthquakes in the region. The top floors of this warehouse can reach up to 108 degrees Fahrenheit, causing an angel's share of no less than 15% annually.

"This elegant, quintessential single malt celebrates the craftsmanship of Kavalans master blender released after his hat trick of top prizes: The Icons of Whiskys 2018

"Kavalan distillery continues the tradition of passionate commitment to creating the premium whisky. The effort goes into every drop of new make spirit and every

Ultimate Spirits Challenge 94 The fresh air in Yilan gives this whisky its smooth, creamy and refreshing character. The nose has tropical fruitiness with honey, vanilla,