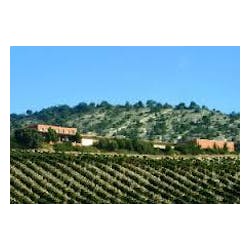 Hacienda Wine Cellars is a former winery once owned by Frank Bartholomew, that was located in Sonoma, California, United States. Hacienda was founded in 1973 after Bartholomew sold his ownership of Buena Vista Winery in 1968. After the sale, he retained the majority of his original vineyard land, and proceeded to acquire a former hospital located near the vineyard land and developed it into a winery. By 1977, it was operated by A. Crawford Cooley, producing 25,000 cases a year. JFJ Bronco purchased Hacienda by 1992, as well as Hacienda's sister label, Antares.

" Hacienda Chardonnay is a straw-colored wine that profiles a wonderful variety of fruit and vanilla, to name a few. On the palate, the wine

Wine Advocate 94 "The current vintage for the crianza is 2012. The 2012 Crianza, from a dry vintage, resulted much fresher than expected, fresher than 2009

Wine Advocate 93 "I tasted three breathtaking wines, starting with the 2011 Crianza which is, year in, year out, one of the best crianzas from Ribera

Robert Parker 93 "The wine at Hacienda Monasterio is made by Peter Sisseck of Dominio Pingus. The vineyards are in the tenderloin of the region between

Robert Parker 94 "Regarding Hacienda Monasterio, all you really need to know is that the wine is made by Peter Sisseck, the man behind Pingus. The