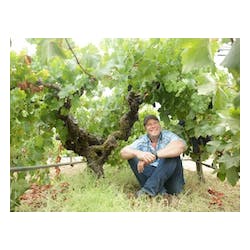 "Limerick Lane is a 30 acre property located just south of Healdsburg in the northeast corner of Russian River Valley AVA. Like many historic vineyards in the Russian River, Limerick Lane was originally planted in 1910 by Italian immigrants, the Del Fava family, and today is considered one of the top sites for Zinfandel in all of Sonoma County. The winery is now owned and run by 2nd generation winemakers, Jake and Scot Bilbro, sons of Chris Bilbro of Marietta Cellars fame. The vineyard was originally purchased from the Del Favas in the late 70's by the Collins family who began to refurbish the property and replant some of the sections that had fallen into disrepair. The Collins' did not make wine at first but sold their grapes to top Zin producers such as Ravenswood, DeLoach, and Gary Farrell. They began making their own wines in 1986, but continued to sell some grapes, a tradition that the Bilbros continue to this day. Russian River Zinfandel is unique in that it combines powerful fruit and spice with a solid core of acidity due to the warm days and cool nights of the area. The Limerick Lane site is particularly well-drained and rocky, making it perfect for growing not only Zinfandel, but also Syrah and Grenache which are also planted on the property. Today, the core wines at the winery are the Estate Zinfandel and a Syrah/Grenache blended red. In addition to these wines there are limited production old-vine and single parcel Zinfandels as well as a few vineyard-designated Syrahs. Limerick Lane is yet another crown jewel of the Bilbro family who are quietly becoming a force in the California wine scene. Besides Limerick Lane, the Bilbro brothers also now own the historic McDowell Vineyard in Mendocino County (now called the Gibson Ranch, after its original owners). Their brother, Sam Bilbro, also has a cutting edge winery in the Healdsburg area focusing on both Italian varietals and other old-vine heritage California plantings. This is an exciting property (and family!) to watch in the years to come...!"

"Our Estate Zinfandel is our flagship wine. Originally planted by Italians at the start of the 1900’s, this wine hearkens back, in some ways, to

Jeb Dunnuck 94 "The 2017 Zinfandel Russian River Estate (there's a little bit of field blend here) was brought up in neutral oak, and it offers

Vinous Media 95 "The 2016 Estate Zinfandel shows the more powerful, muscular side of the estate. Rich, pliant and creamy, the Estate hits all the right

Vinous Media 93 "The 2015 Zinfandel Estate is fabulous. Juicy, pliant and quite giving, the 2015 is impeccably balanced, not to mention flat out delicious. The

Robert Parker 94 "The 2014 Zinfandel Estate is primarily Zinfandel, but there are other grapes in this mixed black field blend, including Peloursin, Négrette, Syrah, Petite

Robert Parker 92 "The 2013 Zinfandel from the Russian River is another sexy wine, and one of their largest production cuvées of just under 2,000 cases.

Wine Enthusiast 95 "Made from 70% Syrah and 30% Grenache, this deceptively restrained wine shows a silkiness of texture wrapped around a brightness of soft, red