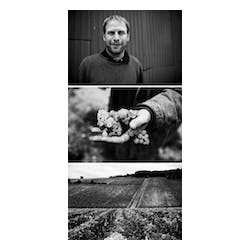 Patrick Piuze- a Montreal native- is a rock star in Chablis, having taken the region by storm when he arrived over decade ago. He worked for Jean-Marc Brocard and Jean-Marie Guffens before starting his own label in 2008, and has very quickly come to be counted among the legendary names of the region, not least because he became drinking buddies with most of them. The guy is hella-good fun to hang out with... and while that may sound like an irrelevant detail, it is not: Piuze works with purchased fruit, and his great relationships with the growers of Chablis have allowed him access to choice parcels in all of the great sites. As for technique, he is a maverick. While 90% of Chablis is machine-harvested, he harvests everything by hand, a paramount factor in the quality of his wines. While most cellars use a pneumatic press, he uses a vertical one because he likes the initial blast of oxygen for the wines in hopes of preventing pre-mox later, a way of thinking also espoused by Jean-Marc Roulot. While most vintners make one indifferently blended cuvée from mixed sites for their villages wine, Patrick obsessively crafts no fewer than SIX different villages-level wines from six different towns. In our tastings together, he touts them as the qualitative peers of his 1er Cru's, and with good reason--they are extraordinary. To make wines this way, Patrick has become a walking encyclopedia of the terroir of the area.

View From the Cellar 94 "The 2020 Chablis les Schets from Domaine Piuze is a superb wine in the making. The bouquet is pure, focused and

View From the Cellar 91 "Domaine Piuzes 2020 Terroir de Fy is another excellent AC, and this is just a touch more forward in personality than

Vinous Media 90 The 2019 Chablis "Terroir de Chiche" has a waxy bouquet displaying touches of jasmine and broom. The palate is well balanced with

Vinous Media 91 The 2019 Chablis "Terroir de Corgis" is well defined on the nose, with more floral scents, dandelion and jasmine developing in the

The Wine Advocate 93+ "The 2018 Chablis 1er Cru Schet is one of the high points of the range once again, unwinding in the glass with

James Suckling 91 "This has a very plush texture and a smooth build on the palate with greater depth, thanks to some older oak maturation. A

The Wine Advocate 91+ "Always one of Piuze's finest cuves at the communal level, the 2018 Chablis Terroir de Courgis is excellent, revealing notes of smoky

Vinous Media 90 "The 2018 Chablis Terroir de Chiche is powerful and dense, with somewhat angular contours that give the wine its distinctive feel. Dried flowers,

Wine Spectator 91 "There's flesh here, presenting a backdrop for the lemon, apple and seashore notes. The balancing acidity shines on the finish, which echoes the

Wine Spectator 91 "An oyster shell note adds depth to the apple and lemon flavors in this textbook Chablis. Rich and fleshy, finishing in a clean,