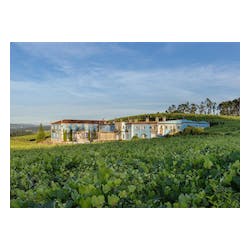 Granbazán farms 17 hectares of Albariño vines in Val do Salnés, the sub-region of the Rías Baixas which is centered around the town of Cambados. Val do Salnés is the site of the oldest Albariño plantations. It is also the coldest and wettest of the five sub-regions. The average temperature for the year is 55°F and it rarely exceeds 85°F, even in the hottest part of the summer. Grapes are trained in the traditional pergola fashion and soils are based on granite with alluvial topsoil. Granbazán supplements their estate fruit with long-term contracts with smallholders in the area.

Wine & Spirits 92 "This albario offers its fresh coastal richness with the kind of naked joy delivered in a freshly shucked scallop. That clean depth

James Suckling 93 "So much floral intensity, showing everything from snowdrops to honeysuckle, as well as fresh thyme and conifer. Medium- to-full-bodied with resounding freshness and

Vinous Media 91 "Pale gold. Fresh melon, tangerine, mint and chalky minerals on the nose, with a floral nuance building in the glass. Juicy, focused and