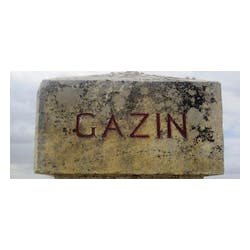 The vineyards of Pomerol has developed, from the 12th century to the Revolution, under the auspices of the Knights of St. John of Jerusalem of Rhodes and of Malta. The Castle GAZIN, who was a village in the 18th century, is probably located at the location of the "Hospital of Pomeyrols" built by the Knights to host the pilgrims on the road to St Jacques de Compostela. The name of the second wine of the vineyard "l'Hospitalet de Gazin" is directly inspired. The vineyard of Château GAZIN covers an area of ??26 ha in one piece located on the upper terrace of the terroir of Pomerol. The terroir of Château Gazin is composed of serious Günziennes surface and comprises basement, blue and green clays including iron oxides (iron oxide).The vineyard is composed of 90% Merlot, 7% Cabernet Sauvignon and 3% Cabernet Franc. The average age of the vines is 35 years. The vines are planted due to 5500-7000 feet per hectare.

Wine Advocate 95 The 2016 Gazin is a blend of 87% Merlot, 5% Cabernet Sauvignon and 8% Cabernet Franc this year. Medium to deep garnet-purple

Wine Advocate 94 “The 2014 Gazin was stubborn and broody when tasted in bottle, but give it a few swirls and there comes forth gravel and