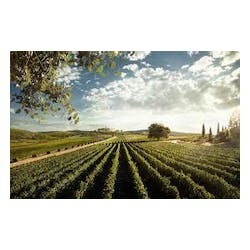 For a long time Bolgheri's Castiglioncello was used as Sassicaia's winery as it was the closest building to the vineyards at more than 300 m a.s.l.. But as new vineyards were planted at greater distances and lower altitudes, a new larger winery had to follow. The new, more central location was decided in the 1960s. This is where it can be found today, on the cypress alley, close to the San Guido Oratory, which gives the estate its name. A third smaller winery was built in 2007 by architect Agnese Mazzei, it houses the barriques for the ageing of the Sassicaia.

"Sassicaia 2018 is firing on all cylinders make no mistake. It is a landmark vintage not just noteworthy because it is the wine’s 50thanniversary, nor

Wine Enthusiast 97 "Aromas of exotic spice, baked plum and French oak mingle with camphor and blue flower on the nose. This boasts extraordinary elegance and

Wine Enthusiast 97 "Aromas of exotic spice, baked plum and French oak mingle with camphor and blue flower on the nose. This boasts extraordinary elegance and

Wine Enthusiast 93 "Subtle aromas of cedar, cassis, tobacco and a whiff of camphor slowly take shape in the glass. A blend of 60% Cabernet Sauvignon

Wine Advocate 100 "The 2016 Sassicaia is a wine of soaring achievement. I tasted this wine several times during the course of its creation in both

James Suckling 98 "Love the aromas to this young red with blackcurrants, sage, cinnamon and five-spice character. Changes all the time. Full-bodied, dense and powerful with

Wine Enthusiast 99 "One of Italy’s most iconic bottlings, the 2012 Sassicaia is drop-dead gorgeous. A blend of 85% Cabernet Sauvignon and 15% Cabernet Franc,

Wine Spectator 90 "Balanced, with blackberry, spice and mineral aromas lead to a medium body in this balanced red, with well-integrated tannins and a fresh finish."

"Sassicaia is a unique interpretation of the Cabernet variety, a wine of great breadth, complexity and longevity. The intense blackberry and cassis aromas, offset by

Robert Parker 93 "The 2005 Sassicaia is another strong effort from Tenuta San Guido. Medium in body, it reveals an understated, delicate expression of smoke, herbs,