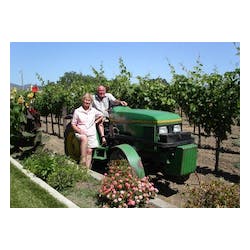 The Biale family, immigrants from Northern Italy, began growing grapes in Napa in the 1930's – Zinfandel only. Zinfandel, California's adopted grape, was widely planted by immigrants throughout the state's history as a highly flavorful red grape well-suited for its expansive range of arid climates and diverse soils. In the 1940's Aldo Biale sold bottles of illicit homemade Zinfandel known as "Black Chickens" over his party line phone service. In Napa Valley, market pressure for Cabernet Sauvignon and other French varieties has now made Zinfandel a rare variety comprising less that 3% of the valley's grape production. Committed to the tradition of farming Zinfandel, Aldo Biale and son Robert decided in 1991 to form a partnership with Marketer Dave Pramuk and set a goal of producing a world-class wine from the oldest Zinfandel vines on the Biale ranch in Napa's Oak Knoll District. The inaugural wine was a quantity of 400 cases produced from 8 acres of old non-irrigated low-yielding vines called "Aldo's Vineyard." Now, under the direction of Bob Biale, Dave Pramuk, and winemaker Steve Hall, Biale has established itself in the Cabernet Sauvignon saturated Napa Valley as a sort of renegade/ heritage-driven house of Zinfandel – making a series of wines of distinctly different personalities that resonate with the ultimate expressions of their sites – some being among the oldest vineyards in America. Unusual for Zinfandel, Biale has established a house style utilizing intensive old world Burgundian methodology from vineyard to barrel to bottle that combines elegance and balance, with Zinfandel's natural vibrance and intensity. With 20 Zinfandels nearly 20 years later, Biale is recognized internationally by writers and sommeliers as being among California's very finest producers of Zinfandel – the wines being featured on A-restaurant wine lists from coast to coast. Robert Parker, Wine Spectator, Food and Wine, and Decanter have all lauded Biale as one of California's top practitioners of Zinfandel. In addition to Zinfandel, Biale is recognized for producing blockbuster and ageworthy red wines from another California heritage variety – Petite Sirah, plus small lots of Syrah, Sangiovese, Barbera, Rhone blends, and Sauvignon Blanc.

Party Line is a throwback to the old days of Zinfandel when Californias wine-growing families made wine for every-day consumption. The Biale 2019 Party Line

Tasting Notes "The Oak Knoll winegrowing region is prevalent in this wine with its dark color, ripe aromatics and juicy acidity. The nose is full of

Party Line is a throwback to the old days of Zinfandel when Californias wine-growing families made wine for every-day consumption. The Biale 2019 Party Line

Wine Enthusiast 94 "This is a tremendously delicious vintage of this wine, made from estate sites within the Oak Knoll District. Blackberry and cinnamon highlight a

Tasting Notes "The Oak Knoll winegrowing region is prevalent in this wine with its dark color, ripe aromatics and juicy acidity. The nose is full of

Wine Enthusiast 91 "This is a dark, brooding wine that's aged in Burgundian oak for 17 months. The blue and black fruit is lush and ample,

Wine Enthusiast 92 "Made mostly from Oak Knoll District fruit, this perennial favorite offers rich tones of mocha, blackberry and cinnamon toast that are balanced by

Wine Advocate 92 "The 2015 Petite Sirah Royal Punishers is inky purple-black in color with a warm plums, blueberries and cherries-scented nose with touches of spice

Wine Enthusiast 93 "This perennial favorite lives up to its word-of-mouth goodness, offering fistfuls of blueberry and huckleberry with a juicy length and throughput of acidity.

Wine Advocate 94 "Lastly, the 2014 Zinfandel Black Chicken (its name coming from the code name used when ordering a jug of Zinfandel during the Prohibition

Wine Advocate 93 "The 2014 Petite Sirah Royal Punishers hails from Rutherford and has a wonderfully juicy blackberry and cassis nose with white flowers, licorice and

" The Black Chicken is named after the secret Prohibition call sign for wine when people would call Aldo Biale on the old "party line".

Wine Spectator 92 "Ripe, plush and juicy notes of cherry, wild raspberry and blackberry are impressive for their density and polish, showing aromatic details of violet,

Wine Enthusiast 95 Editor's Choice "From a vineyard east of Napa first planted in 1905, Moore is densely structured and deceptively elegant, all while maintaining an intensity

Wine Spectator 93 "Fragrant, charming and powerful, with dense, chewy tannins at the core and a complex array of flavors. Starts with a baseline of Earl

Wine Enthusiast 92 "Spicy in black plum and berry fruit, Black Chicken is a consistent blockbuster for Biale, alive and fresh in waves of exotic cinnamon

Wine Enthusiast 91 "Made from a mix of vineyards across the Napa Valley, this pays tribute to the early days of grape growing in the region

" The 2011 Zinfandel R.W. Moore Vineyard is plush, deep and beautifully balanced. The wine opens with a burst of dark fruit that follows through

Wine Spectator 92 "A couple hundred yards away from Aldo's Vineyard, directly behind Aldo's home, is a different vineyard whose grapes produce a different wine with