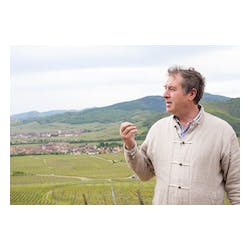 "...their "Classiques" line-up, which are generally far above average for entry-level wines from Alsace; Blanck declassifies all of the must from their young grand cru vines into this range of wines. Even better, these inexpensive wines speak clearly of both their variety and their region, and are usually fairly dry. However even Blanck's grand cru wines are characterized by early appeal and easy-drinking charm, and they are some of Alsace's best food wines." -Vinous Media, April 2015The Paul Blanck estate traces its history in Alsace back to the 17th Century, where they produce a stunning and diverse lineup of wines from enviable parcels in the Haut-Rhin district of Alsace. Located in the village of Kientzheim, Domaine Paul Blanck produces wines that are balanced, terroir-expressive, and versatile. Owners Frédéric and Philippe Blanck farm ther vines without the use of chemicals, seeking to gain the clearest possible expression of vineyard character. From the chiseled, sumptuously mineral Schlossberg to the opulent and broad Furstentum, Blanck's Grand Cru offerings rank with the best in the region. His single-vineyard (lieux-dits) wines from such sites as Patergarten and Rosenbourg are comparably top-flight, and his line of everyday 'Classique' wines show the versatility and breadth of the Blanck range.

Wine Information: From a vineyard of sand and gravel. Around the village of Kientzheim. The juice is extracted with infinite care in our air-bag press. The

Wine Information: Soil: Gravel, south-facing. Vinification: The juice is extracted with infinite care in our air-bag press. The slow, gentle pressing avoids crushing the stalks and pips. The must starts

Wine Information: From a vineyard of sand and gravel. Around the village of Kientzheim. The juice is extracted with infinite care in our air-bag press. The

Wine Enthusiast 95 "Juicy plum, ripe apple and yellow pear are wrapped in a zesty citrus haze. The palate speaks with the same fruity generosity and

Wine Advocate 94 "The 2014 Riesling Schlossberg has a very deep, rich and mineral, as well as herbal bouquet of ripe Riesling and lemon aromas. Full-bodied,

Wine Enthusiast 92 "Lovely and pure notes of Conference pear hover above a concentrated taut body. This is dry and has a pleasantly bitter pithy edge

Wine Spectator 90 "Crisp and minerally, this linear white has a lip-smacking palate of crunchy white peach and pear fruit, accented by apple blossom, ginger and

Wine Spectator 92 "Refined and silky, with smoke and mineral notes underscoring the juicy flavors of dried papaya and apricot, anise, beeswax and lemon preserves. The