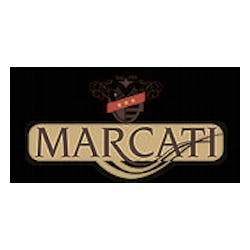 ORIGINS: In 1919 the Marcati brothers, Pietro and Luigi, began their business in the family-owned pharmacy, which soon became their first craft workshop. The products soon became renowned and highly appreciated and production increased. In 1929 the first industrial plant was established in Verona, but was destroyed during World War II. Following the post-war reconstruction the company continued to grow and during the Eighties it began to export, first to European countries and later to various other continents. Mr. Pietro's old recipe book, which he created starting in the Twenties and kept continuously updated, contains ancient recipes for fine infusions and delicate liquors. The recipes relate the entire experience and enthusiasm of the man who understood how to identify, dose and mix up ingredients to create fine and exclusive formulas. Even today, that recipe book is a source for Marcati's production, which has succeeded in maintaining intact its character of craft originality, combined with research and experimentation. The ties with the territory and regional liquor making tradition, the harmony of tastes and the quality of Marcati products have conquered a market that is undergoing strong evolution.Today, the Marcati brand is present with its products in 25 States throughout the world. Brothers Pietro, Andrea and Maria Paola are the latest generation that is running the company.

Wine Enthusiast 87 "Creamy yellow and viscous, this proffers a mild lemon scent. Most of the lemon-peel flavor emerges on the finish, plus a hint of

"In 1919 the Marcati brothers, Pietro and Luigi, began their business in the family-owned pharmacy, which soon became their first craft workshop. The products soon