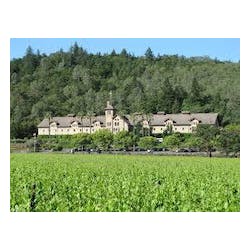 Founded in 1946, The Culinary Institute of America (CIA) is an independent, not-for-profit college offering bachelor's and associate degrees in culinary arts and baking and pastry arts as well as certificate programs in culinary arts and professional wine studies. The college has campuses in New York (Hyde Park), California (The CIA at Greystone, St. Helena), and Texas (San Antonio). In addition to its degree and certificate programs, the CIA offers courses for professionals and food enthusiasts. Located in the heart of the Napa Valley, The CIA at Greystone is housed in a magnificent stone winery building, which was built in 1889 as Greystone Cellars. In more recent history, the Greystone building was known as Christian Brothers from 1950 until 1990, when the CIA purchased the property. The beloved winemaker of the Christian Brothers, Brother Timothy, was an avid collector of corkscrews, and his collection, one of the most impressive in the world, is on permanent loan to The CIA at Greystone, and the inspiration for the Greystone Cellars wine labels. Since 1995, one of Greystone's neighbors, Markham Vineyards, has been producing a small amount of Greystone Cellars wines exclusively for the CIA, under the stewardship of Winemaker Kimberlee Nicholls and President Bryan Del Bondio. With the national launch of Greystone Cellars® wines, the CIA and Markham Vineyards bring the highest-quality California wines at the best possible value to a larger audience. Greystone wines are approachable, easy to drink, and befitting their connection to the CIA, enhance the culinary experience of any meal at which they are served. A portion of the proceeds from the sale of Greystone Cellars wines will benefit the CIA at Greystone, a not-for-profit institute of higher education.

"Coming from California’s central coast, Greystone Chardonnay is a crisp wine, with a citrus backbone. The heat of the Sacramento Delta provides definite richness and

"This light-bodied wine has an attractive, tangy combination of lemon and apple flavors that make it taste fresh and lively. It is nice and dry,

Coming from California’s central coast, Greystone Chardonnay is a crisp wine, with a citrus backbone. The heat of the Sacramento Delta provides definite richness and