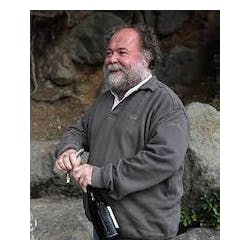 Marc Ollivier of Domaine de la Pépière is an example of a winemaker who has grown with his vines. In the early 1980's Marc, who was an engineer at the time, decided to move to the country for a slower pace of life. His father owned some vineyards in the cool Atlantic-influenced zone of Muscadet-Sèvre-et-Maine, but was not a winemaker. Marc took over his father's vineyards and bought a parcel called Clos de Briords from an elderly neighbor. Marc's first vintage was 1985. Today, many of Marc's vines are 40+ years old, and some of his vineyards are planted on granite soils, a rarity in the region. His primary goal as a winemaker at the time was to simply complete fermentation. As such, he began fermentation using cultured yeasts and finished the wine off with a dose of SO2. As Marc matured as a winemaker, he experimented with ambient yeasts and began bottling with minimal amounts of SO2. The results were extraordinary; the wines showed greater depth, richness and complexity. Encouraged by his success, Marc began transitioning all his vineyards to organic and continued his minimalist approach in the winery. His racy, lemon-tinged, mineral-driven Muscadets have since become the benchmark for the region and have opened up a world of previously unknown potential in the area. Marc's success is combination of good fortune (his vineyards were never touched by wine consultants encouraging new, higher yield clones) and an open-minded, experimental approach to making the best possible wines. All the vineyards are from original stock: Ollivier is the only grower in the Muscadet who does not have a single clonal selection in his vineyards. The fruit is hand-harvested (a rarity in the region) and only natural yeasts are used for fermentation. Extended lees contact, often until April or May of the following year, adds added depth to the wines.

82% Ct (aka Malbec)/18% Merlot. Only three of Ppire's 43 certifed-biodynamic hectares of vines are planted to black grapes: Ct, Merlot and Cabernet Franc (known

A sensational Muscadet, showing a pale golden color and beautiful aromas of ripe pear and quince with hints of fennel, minerals and nuts. The palate

Showing subtle aromas of white fruits - pear and apple, nice ripeness, with wet stone and herbal notes. The palate is predominantly minerals with

It is the benchmark style of the estate: racy, crisp, acid- and mineral-driven, with a bare hint of richness from the sur-lie factor, very much

Wine Spectator 90 “Notes of beeswax surround the core of clementine and white peach flavors, with vibrant acidity and mineral elements imparting a mouthwatering feel on

100% Melon de Bourgogne. Marc Olliver releases every harvest's "sur lie" bottling in several stages. For the last of the 2015's, the label is slightly

100% Melon de Bourgogne. Clos des Morines is a lieu-dit in the cru of Château Thébaud. It came into Pépière world via Marc Ollivier's partner

Wall Street Journal 20 Splendid Summer Wines - All Under $20 "Is there any bigger bargain in France than a good Muscadet, especially when it comes from

View from the Cellar 93 "The 2014 Las Gras Moutons from Domaine de la Pépière is a young and very promising bottle of Muscadet, but like

"Gras Moutons is a plot recently acquired from a neighbor that consists largely of deeply fractured gneiss soil. This soil, as well as a gentle

"An old-vines cuvee of Muscadet from a single plot vineyard planted in schist. These are among the oldest vines in the estate (they were planted