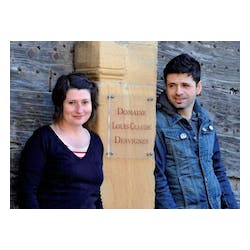 The Desvignes family, as the name suggests, has been making Morgon for generations. The vineyards are on the Montagne de Py in the center of Morgon, the fruit of which is of far superior quality to that produced in the outlying areas of the appellation. If there were a classification of vineyards in Morgon, Côte-de-Py would be a premier cru and Javernières a grand cru. They are located on the best exposition of the hill, with soil of decomposed schist, and Javernières is a plot within the Côte-de-Py with a little more clay. In the past years, Desvignes has been picking the fruit later than the other vignerons in the area with a mind to get fruit of optimal ripeness. The wine is vinified by the traditional cru Beaujolais method with a grille to keep the cap submerged. Recently, the fermentation has been longer and more controlled than in the past in order to extract the color and material that are the most obvious virtues of this wine. Morgon is, along with Moulin-à-Vent, the most age worthy of the Cru Beaujolais and Desvignes wines are fine examples. The wines age terrifically well and take on the character of Pinot Noir, or pinotize (the term used in Beaujolais). When young, the character is of dark cherry, raspberry and blackcurrant. With age, the wines become more earthy, velvety with cocoa and coffee tones. At the requst of the importer, Louis/Dressner, the wines are bottled unfiltered some years or at most lightly fined.

The Wine Advocate 92+ "...deeper-pitched and more brooding than the Corcelette, displaying aromas of blackberries, cassis, pencil lead and dried flowers. On the palate, it’s

Vinous Media 92 "Youthful violet color. Displays vibrant dark berry and peppery spice aromas, along with a hint of musky herbs. Sweet and incisive on the