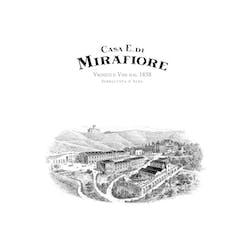 The winery was founded in the 1870s by King Vittorio Emanuel II of Savoy and named for his son (with Countess Bela Rosin), Emanuele, Count of Mirafiore within the Fontanafredda village in Serralunga d'Alba. The name was lost from the estate in the 1940s and passed through several owners until Oscar Farinetti bought the Mirafiore name once again. The wines of Casa E. di Mirafiore are made exclusively from the traditional varieties of the Langhe. Respected winemaker Danilo Drocco follows traditional Piemontese vinification practices including long maceration and aging in large oak casks. The essence of Casa E. di Mirafiore comes to life at the estate in the Fondazione E. di Mirafiore, which includes a restaurant, library, and theater where the winery hosts poetry, music, and speaking events.

Decanter 96 "Intense aromas of perfume and sweet Indian incense, fresh oranges and generous cherry fruit on the palate, give way to powerful but well-integrated tannins.

Wine Spctator 93 "Bright floral and cherry aromas are followed by fresh fruit flavors, with shades of leather, tar and underbrush. The tannins are firm, offering

Wine Spectator 93 " Though firmly structured and tight now, this is dense, with ripe black currant and black cherry fruit, along with leather, tar and

Vinous 92 "Smoke, tar, incense and leather all take shape as the 2008 Barolo opens up in the glass. The mid-weight personality of the vintage comes

Wine Advocate 92 "The 2007 Barolo is a sexy, radiant wine that captures the essence of the year. Soft and inviting through to the finish, the