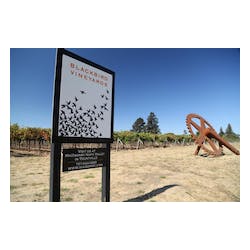 Purchased by Michael Polenske in 2003, Blackbird Vineyards (a former walnut orchard first planted with 5, 717 Merlot vines in 1997) is now an ultra premium label in its own right. Fittingly, the word 'Merlot' is French patois for 'little blackbird.' An early harbinger of Blackbird's potential arose when Mia Klein of Dalla Valle fame created a Blackbird Vineyard designate for her highly acclaimed 1999 Selene Merlot (no less than 95% of the fruit in the bottle must be from the named vineyard). Three of the top wine critics in the industry - Robert Parker, Stephen Tanzer, and Wine Spectator's James Laube - scored this wine in the 90s.

Wine Advocate 92 "The 2016 Arise Proprietary Red is a blend of 55 Merlot, 25 Cabernet Franc, 17 Cabernet Sauvignon and 3 Petit Verdot. It has

Wine Enthusiast 92 This blends 38% Merlot with 32% Cabernet Sauvignon and 30% Cabernet Franc. Together these find a healthy companionship of wood, cedar, currant

James Suckling 91 "So much dried flower, walnut and plum aromas with mineral undertones. Full body, silky tannins and a flavorful finish. A sweet tobacco and