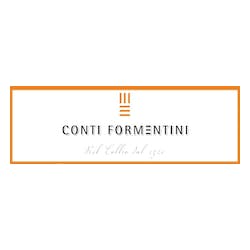 In 1520 the Formentini family, Venetian Counts, purchased the castle in the town of San Floriano del Collio, the highest hilltop village in eastern Friuli (Collio, province of Gorizia) and the surrounding feudal lands. Wine from the vineyards surrounding the Castello Formentini and the hills of San Floriano has been made here ever since and the Formentini cellar is in fact, considered one of the oldest in Collio. Today, there is a modern winery located opposite the castle, which is still owned by the Formentini family. At Conti Formentini, Winemaker Cristian Scrinzi manages 30 growers who have been supplying the winery for decades. The focus of the winery is on varietal-driven, aromatic whites typical of the area, including (Tocai) Friulano, Sauvignon Blanc, and Pinot Grigio.

"Pinot Grigio is the most widely planted grape in Collio (and Friuli), which is made here in a highly qualitative manner with added complexity and