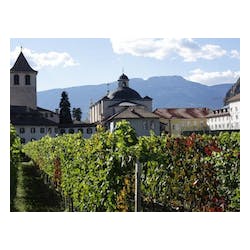 "The ancient monastery of Muri-Gries, located just south of the Bremmer Pass in Süd Tyrol is the source for a bevy of clean, complex and classy wines made from the traditional grapes of this beautiful region. Muri-Gries remains a working Benedictine monastery, which was originally built in the late eleventh century as a fortress. In the fourteenth century, the fortress was donated to a local group of monks and converted into a monastery. Brothers of the Benedictine order arrived here from neighboring Switzerland in 1845 to take up residence in the recently abandoned site, and immediately brought their more sophisticated viticultural approach to the monastery's wines. Muri-Gries began to produce DOC wines in 1947, and since then the monastery has won local fame for the high quality of its wines, and is now becoming well-known to Italian wine-loving insiders throughout Europe and the US."

Vinous Media 90 "The 2019 Pinot Grigio lifts from the glass in a pretty display of ripe peach with a lemon twist, crushed stone and hints

Vinous Media 91 "The 2019 Muri Gries Kretzer is a varietal Lagrein Rosato, and its stunning, showing a mix of ripe apple and melon, with a

Vinous Media 90 "Bright orange pink. Banana, anise and balsamic oils on the nose and in the mouth. Saline and classically dry with harmonious but zingy

Vinous Media 90 "Bright pink-red. Aromas of herbs and flowers complement subdued notes of red fruit. Then bright and floral in the mouth, with nice juicy

Vinous Media 88 "The 2015 Pinot Grigio is another attractive, open-knit white from Muri-Gries with plenty of near term appeal. Dried pear, white pepper and spice

Robert Parker 90 "With respect to the white wines, the 2012 Pinot Grigio is a surprisingly intense, medium-bodied, vibrant, fresh white with good acidity and a