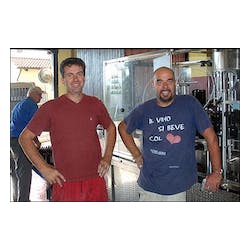 Seeming to appear out of nowhere about 10 years ago, brothers Enzo and Carlo Revello took over their father's nine-hectare estate and almost immediately became one of the hottest estates in La Morra. The brothers are also very close to Elio Altare, who, along with Beppe Caviola, has worked with them since their decision to leave their previous careers for full-time winemaking work. Enzo works mainly in the cellar and Carlo in the vineyard. Since the release of their first Barolo (1993 vintage), which was a blend of fruit from all of their vineyard holdings, the brothers have released four cru bottlings, "Giachini", "Rocche dell'Annunziata", rare "Conca" and the "Gattera," first released in 1999. Vineyard Management: Sulfur- and copper-based products are mainly used. No insecticides are used. Only organic fertilizers (manure) are used (every 3-4 years). Natural cover crops (grass cover) are left between the rows of vines. The grass is mowed and in autumn the soil is tilled (every other year). Very low doses of SO2 are used in in the wines. Farming Practice:Practicing Organic

James Suckling 94 "A firm, silky red with plums and strawberries, as well as undertones of dried flowers and sage. Its full, yet so finely tannined

The Wine 100% Barbera planted in clay soils. Maceration occurs over 3-4 days at 27-30°C. Fermentation and maturation takes place in stainless steel tanks for 8-10

Wine Spectator 92 "This is concentrated and vivid, yet with a fluid feel that allows the blackberry and black cherry flavors to work the dense structure.

James Suckling 95 "The dark-berry, strawberry and charcoal aromas are impressive. Full bodied and totally integrated with wonderful presence and composure of fruit and tannin balance.

Wine Information: 100% Nebbiolo planted in calcareous clay soils at 230-250m above sea level. Fermentation and maceration with the skins for approx. 4 days, the alcoholic

James Suckling 92 "This is more like a Barolo with its rich, deep fruit and soft tannins. Full-bodied, fresh and flavorful. Excellent. Drink now" Wine Information: 100% Nebbiolo

James Suckling 92 "A juicy red with hints of plums, chocolate and coffee. It seduces you with its subtle ripe fruit and linear tannins. Long and

Wine Spectator 93 "This is harmonious, featuring cherry, licorice, sandalwood and leather aromas and flavors. Offers an inherent sweetness and a fresh feel, with a refined