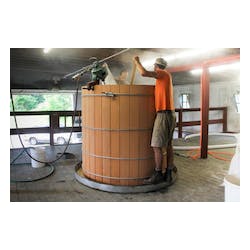 In an era of industrially produced spirits, Coppersea Distilling takes the long way around, confident in its philosophy of favoring tradition over speed and quality over volume. Coppersea is an award-winning farm distillery in the Hudson Valley that crafts fine whiskies and eaux de vie from locally sourced grain and fruit. Named for the sea of copper stills dotting New York's Hudson Valley throughout the 1800s, this unique distillery invokes a sense of days past. Employing Heritage-Methods distilling techniques little-used over the last century, Coppersea strives to produce spirits in a manner reminiscent of 19th-century New York farmstead distilleries. Heritage-Methods distilling is a term that Coppersea coined to describe their unique process that employs techniques little-used over the past 300 years. "We want what we're doing to be incredibly traditional," explains Angus MacDonald, owner and master distiller at Coppersea. "For us, it's not just a product," says Christopher Williams, Coppersea's distillery manager. "We're very much tied up in the process." Every step of that process is modeled on the ways of 19th-century distilling. Grain from local farms: The only way to create a true local whisky is to use locally sourced ingredients. Coppersea works with farms throughout the Hudson Valley to procure high-quality grain that expresses the terroir of this beautiful region. When Coppersea uses batches from a single farmer's grain, the label denotes its contents as "Single Farm Source." Coppersea will soon begin producing estate-grown whisky with grain grown on its own farm. Floor malting: Malting is the process of germinating grain to activate enzymes that can convert starch into fermentable sugar. Most malt is made at industrial maltings from commodity grain and sold in bulk; Coppersea employs the ancient technique of floor malting. A layer of germinating grain is spread across the floor and allowed to sprout over the next five days. During this time, the grain is turned over using a large metal rake that Christopher had fashioned by a local metalsmith. The grain at this point is called "green malt." The green malt is then kiln-dried. "There's an ideal moment in time when the enzymes become fully bio-available but they haven't gone to work on the starch," explains Christopher. "When you kiln it to different degrees to arrest this process, you get different flavors. For a batch, we do 500 pounds, called a 'piece of malt' when it's on the floor. We can use any grain -- if you don't malt your own grain, you're limited to what's available." Milling: Housed in the granary located above the malting floor, Coppersea has used a 1921 Hobart Food Chopper, a 1936 A&P coffee grinder, and a roller mill that the distillery put on top of a painted Shaker cabinet to mill all of the grains that go into its whiskies. The meat grinder is the only practical means to mill green malt -- a slow, laborious process. Mashing and open fermentation: Coppersea ferments all mashes in one of two 400-gallon Douglas Fir fermenters or in a battery of 53-gallon oak hogsheads using water from an on-site well. These vessels are always left open to the air, and the multitude of Hudson Valley wild yeasts have leave to add their character to all of Coppersea's spirits. The fermented mash is then gravity-fed down to the direct-fired stills. Sour mashing: Sour mashing is a technique devised in the 19th century in Kentucky and is one of the most recognizable features of traditional American whiskies. It is the process of collecting a portion of spent mash from a distillation to add to a subsequent mash. This practice generates a better environment for yeast to thrive, creating consistency from batch to batch and giving each mash a concentrated flavor boost. Direct-fired copper-pot stills: Most modern stills are hyper-efficient, precision-engineered, steam-heated behemoths. Coppersea uses a copper pot with a fire under it, as did the medieval Scots and the early American distillers. Coppersea operates three stills: a 250-gallon direct-fired copper-pot beer-stripping still and two 100-gallon direct-fired copper-pot spirit stills. "We direct-fire, which will give you a completely different character," says Christopher. "Almost all other distilleries use a steam jacket. The risk you run is burning the mash, and we've got that figured out. But when we clean the out the still, there will be a layer that didn't quite burn, which will give a completely different character to the product. You're getting unique flavor compounds that give an almost caramel quality." Non-chill filtered: Most large distilleries chill filter their spirits. Chill filtering is a process that removes lipids, pectins and oils, which contain rich flavors and create a pleasant mouthfeel. These compounds can also form a haze or cloud in the spirit. Removing them is purely a cosmetic choice. Coppersea never chill filters its spirits. Quotes taken from "Whiskey & History: Turning back the clock with 'Heritage Distilling'" by Kara Newman, Edible Manhattan, January/February 2014.

Coppersea Corn Whisky is a throwback to an earlier era of American whisky making. Prior to the legal standardization of new charred oak barrels for

Coppersea 100 percent New York Excelsior Bourbon is the first whisky to be aged in barrels made from New York-harvested American white oak since prohibition,