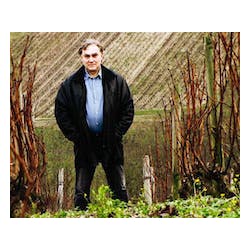 ***** Five Star, Outstanding Sancerre Producer, Robert Parker, Wine Buyer's Guide, 5th edition"Cotat produces old-style Sancerre, quite different from the norm found today... rich, full flavored, thick, and sometimes not bone dry. They are some of the finest Sauvignon Blancs I have ever put to my lips." From 1947 until the early 1990s, the Cotat family made one cuvee of each wine, whether under the Francis Cotat label or the Paul Cotat label. Same wine, two labels. The French government then interceded, deciding it illegal for two "independent growers" to combine their productionto make single cuvees of a wine in a shared cellar. Brothers Francis and Paul decided to retire and turn their vineyards over to their sons, Pascal (son of Francis) and Francois (son of Paul). Pascal and Francois separated their production in order to avoid the same problems their fathers had experienced. Francois continues to operate in the family cellar while Pascal has recently built new cellars. These two wines are more alike than not, however Pascal's vines are slightly older than those of Francois and he harvests a few days later than does Francois. While Pascal's grapes are subsequently a bit more ripe, the wines come across as drier and perhaps a bit more minerally thanFrancois' wines.

100% Sauvignon Blanc Considered one of the top vineyards in all of Sancerre South facing, very steep slope on pure limestone 45+ year old vines.

Vinous Media 94 "The 2020 Sancerre La Grande Côte is a fine wine with a piercing nose of floral and flint. While it may be dry,

The Wine 100 Sauvignon Blanc A famed single-vineyard in Chavignol and a monopole for the Cotat cousins. South facing, with very thin topsils. Very steep

100 Sauvignon Blanc Considered one of the top vineyards in all of Sancerre South facing, very steep slope on pure limestone 45+ year old vines.

The Wine "Pale yellow. Reticent aromas of pear, quince and white flowers. Rich and expansive on the palate, displaying a quince flavor complicated by herbal nuances.