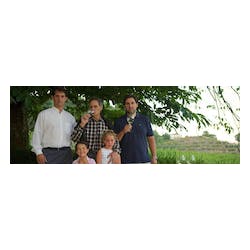 AS LAXAS WINE CELLARS: CENTURIES OF WINEThe brand is born from the hand of Simón Ferro family who purchased these wine cellars in 1975, where wines of the County were elaborated since 1862. At the time, the property had roughly a hectare of traditionally grown vineyard and, what began as a complementary activity to the familiar economy became over the years in a company itself, true to the vision of the family who from the beginning was enthusiastic in obtaining a premium quality white wine. Nowadays, the company is property of the founders' four sons. In 1986, the winery is built up and it participates as D.O Rias Baixas founder. At this point a progressive growth is established and it has gone from producing 8.000 bottles per year to 520.000 in less than a decade at the present time. Nowadays, the winery has its own vineyard covering a surface area of around 50 hectares and, in the last five years, it has made investments in machinery and equipment amounting to almost 600.000 Euros; special focus being given on adaptation of technological developments to the traditional method of wine elaboration. These investments refer to all aspects of production, from the own viticulture to the upgrading of wine storage, bottling line and traceability systems; not forgetting the economic and financial management. As Laxas Wine cellars is also a pioneer in the development of its national and international commercial network and, at present, these wines (Laxas and Val do Sosego - elaborated with grapes 100 percent from the Albariño variety – Condado Laxas – a mixture of albariño, treixadura and loureiro – and Bágoa do miño – "Lágrima" of albariño) are consumed in around twenty countries. More than twenty percent of its production is destined abroad and US remains the largest market, followed by Puerto Rico, Mexico, United Kingdom and Belgium. As Laxas wines also goes to destinations as Japan and Philippines, as well as to other EU countries.

As Laxas is broad on palate with hints of mango, but has great focus and acidity to balance out the weight. Notes of lime, mango,

" Clear straw yellow color with green nuances. Fruity and floral aromas of apple, stone fruits, and lemon. Silky and soft on the palate with

Wine & Spirits 90 Best Buy Year's Best "Bodegas As Laxas has been family owned and operated since its inception in 1862. Located in the Condado de