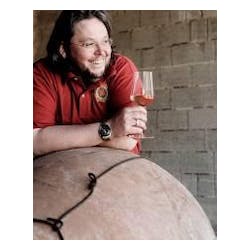 The Ott family has been growing and producing wine in the region of Wagram in Lower Austria since 1889. Bernhard Ott is of the fourth generation and has managed the winery since 1995, when he took the helm from his father, expanding the estate to 28 ha in Feuersbrunn and Engabrunn. After assuming control at the winery, Bernhard worked meticulously to improve the family estate. He improved the cellar with new stainless steel tanks, began bottling everything under Stelvin closure and started enforcing his own personal philosophy – being as true to nature as possible. Bernhard has converted many of his vineyards to biodynamic cultivation, certified biodynamic by RESPEKT, and has taken steps at the winery to reflect this philosophy. Bernhard is extremely diligent in his vineyard work; he adds compost and preparations to the soil rather than fertilizing individual vines, uses cover-crops and biodynamic tinctures and homeopathic remedies to treat vineyard problems. In keeping with the philosophy of the biodynamic approach, work in the vineyards and cellar is done in a holistic and lopped system. Ott found that after switching to biodynamic farming, he was able to harvest grapes from his vineyards several weeks earlier than he had in the years prior to his switch to this biodynamic viticultural approach. "Before, I was one of the latest people to harvest. Now I am one of the earliest." Ott says. He feels he is able to achieve physiological ripness earlier, without getting overly high levels of sugar that would result in high alcohol wines. Bernhard Ott is a cult icon in the world of Austrian wine, leading the way in the Wagram region through meticulous vineyard management in some of Austria's best vineyards. At a young age he has already received Austria's highest accolade as Falstaff's Winemaker of the Year in 2008.

Wine Advocate 94-96 "Ott's 2015 Feuersbrunner Rosenberg 1ÖTW Grüner Veltliner is a selection only from the oldest, 60-years-old vines, whereas in former vintages 45+-year-old vines were