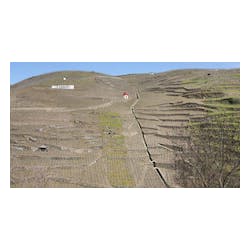 A collaboration inspired by history, Les Vins de Vienne is a partnership of Yves Cuilleron, Francois Villard and Pierre Gaillard. They are the three superstar, Syrah-specialist vignerons in the Rhône. Beginning at Rhone's northern most point in 1996, this trio purchased and rejuvenated the old terroir of the vineyard of Seyssuel, located on the left bank of the Rhone, just 25km from Lyon, north of Cote-Rotie. It was Gaillard's readings of historic writers that led him to Seyssuel, home to famed wines during the Roman era, the Middle Ages, and the 19th century. Purchasing his first vineyard in Malleval in 1981, in addition to Les Vins de Vienne, Pierre now manages 77ha of his own vineyards through the estates that he created at Malleval, Madeloc and Cottebrune.

A collaboration inspired by history, Les Vins de Vienne is a partnership of Yves Cuilleron, Francois Villard and Pierre Gaillard. They are the three superstar,

The Cradle Of The Rhone, 5 Stars "The bouquet is wide, has a blackberry fruit presence that is accompanied by soft violet airs, a cosy note

Wine Spectator 95 "Exotic and layered, with a dense core of peach, mango, quince and nectarine notes that pump through, offset nicely on the finish by

Wine Spectator 90 "Fleshy and open with delicious blackberry, ganache and tobacco notes, followed by a flash of lavender through the mouthfilling finish. Blend of

Wine Spectator 90 "Shows the lightly crisp edge of the vintage, but theres ample weight to the black cherry, pomegranate and raspberry fruit, laced with sweet