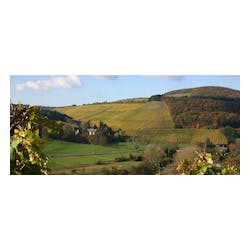 The historic Maximin Grünhaus estate lies at the foot of a long, steep south-facing slope on the left bank of the tiny Ruwer river, about two kilometers upstream from where it joins the Mosel. The estate belongs to the family of Carl von Schubert and is divided into three separate but contiguous vineyards: Abtsberg, Herrenberg, and Bruderberg. Each of these vineyards has its own distinct differences in terroir, which explain the unique character of the wines made at Maximin Grünhaus. The first documentary evidence of Grünhaus, then called "Villa ad Valles," dates from February 6, 966. Emperor Otto I, heir of Charlemagne, confirmed a donation that had been made in the Seventh century by the Frankish King Dagobert. At that time, the buildings, vineyards and surrounding land had been given to the Benedictine monastery of Saint Maximin in Trier. In 1882, it was purchased by an ancestor of Carl von Schubert, who is the fifth generation of his family to own the Grünhaus estate.

Wine Advocate 91 "The 2018 Maximin Grnhaus Riesling Monopol blends fruit from the three grand crus and opens with clear, aromatic mango fruit and, after a

James Suckling 93 “Spring has sprung in this glass! So effusive and yet so delicate, this is a dry riesling fairy tale that came true. Love

James Suckling 96 Great harmony and originality, as well as enormous concentration, making this a stunning Sptlese. The mineral freshness at the finish is literally breathtaking.

James Suckling 90 A very crisp and vibrant wine with a lot of herbal and apple character. Great balance and a very bright mineral finish. Drink