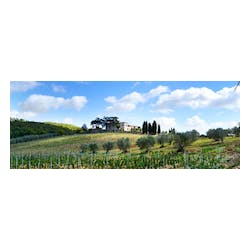 For 23 generations the Bindi Sergardi family has been planting and replanting vines with a never-ending passion for wine The Bindi Sergardi lands have never ceased to produce typical Sienese agricultural products:wine, olive oil, rotating crops, farm animals. The current owner, Nicolò Casini, grandson of Elisabetta Bindi Sergardi and man of his times, has chosen to emphasize the grapevine and olive tree cultivation to promote the farms' excellence. After selecting soils with vocation for vines, he has increased the extension of the vineyards. He has improved the quality of the production through scientific research of new clones and modernization of the cellars. He has acquired new technologies that improve traditional methods while respecting the authenticity of the wines and terroir. His daughter Alessandra joined him in 2005 after following the family's policy of first working three years elsewhere. She took over the wine business with precise aims: to continue the production of high quality wine and to spread the philosophy of the Bindi Sergardi brand all over the world. Thanks to her tenacity and determination, Alessandra, over the last years, has increased the winery's success through a continuous expansion in world markets. Bindi Sergardi's lands spread over 1000 hectares in the province of Siena. The 100 hectares of vineyards are planted in the important DOCG of Chianti Classico, Chianti Colli Senesi and Chianti

Wine Spectator 90 "Cherry, currant, wild herb, leather and tobacco aromas and flavors are supported by a firm structure in this intense red, which is fresh,